Woke early today, although fairly late by Caliente standards — they sure like their early nights and early mornings here. Then again I was never really sure what time it was there; my bedside clock and the microwave clock were in disagreement over what time zone they were in, so time was a very relative thing in Caliente. Nevertheless I was up and about very early this morning and even had a "short stack" of pancakes for breakfast with oodles of maple syrup. Not bad for $3.

Then I was on my way. I tried exploring out from Caliente into Clover Creek Canyon but didn't get very far before I hit private Union Pacific roads. So off on the highway and with the help of my GPS soon found the turn off for the Beaver Dam Road. Road was in good condition and after a while I was down at Barclay having a look around. This wasn't in the canyon any more which was a shame, indeed the most exciting view was around a curve. The track here was immaculate though, a lot of TLC has definitely gone into this track recently. 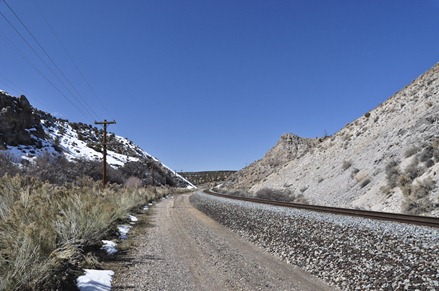 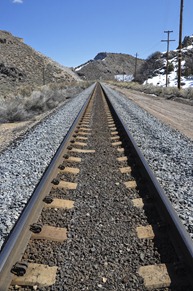 While plodding along I kept hearing plane noises but couldn't spot anything. With the final day of Operation Red Flag in effect I suspect there were lots of well camouflaged fighter jets around. I did spot a few, although only one came out in the photos. Here is a full size crop of it: 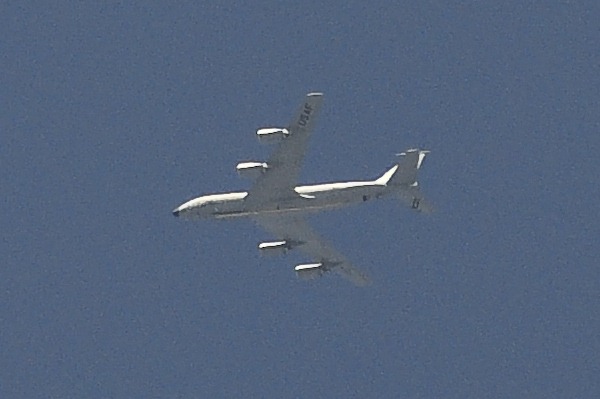 I continued on and decided to try another spot around the corner. I never got there though because the road was terrible. While the road in had been lovely sun baked bud, around the corner it was still very soggy. Dirt down here is very different to back home; it can look quite dry, but if it is even the slightest bit wet it turns into glue and even just walking over it will cake your boots in mud within steps. And it's thick, heavy greasy stuff.

So here I was driving along, the car revving quite high, guess it was slipping but still making ok progress and it was steering ok, although every so often if would fishtail a bit. I came to an especially muddy patch with a pool of water over the top and several thick ruts from previous attempts, but gunned it and made it through fine. Came to the top of a small rise and decided that the road wasn't improving so would go back. I'd just passed a decent turn around area so attempted to reverse back, and was going fine until suddenly the car veered to the right and suddenly got a whole lot slower, and kept slowing down. Rats I thought and put it in forwards. Only I didn't move. OH RATS! (and many more colourful words). Oh bugger bugger bugger! Here I am, miles from anywhere stuck in thick mud!! I wasn't too worried; I had water, food, fuel and warm clothes, but still this wasn't quite how I wanted to spend the day!

I got out and surveyed the scene. Thick squelchy mud, two right hand wheels in the slight ditch at the side of the road, about 6 inches down in the mud, obviously the wheels had been spinning and dug a bit of a hole, although with an automatic and all the fancy electronic gadgets between you and the wheels, you'd never know it.

So I scouted around. I knew the one thing I shouldn't do is hop in and rev the engine and try and spin my way out; no that would just dig an even deeper hole. Better to solve this problem now before it became an even bigger one. Looking around the first thing I saw was heaps and heaps of sage brush. Sage brush is a woody shrub, much like a miniature version of our Tea Tree. I started snapping off bits and stuffing them under the wheels to give a bit of "body" to the mud and some grip to the wheels. A few nearby stones were added. Railway ballast would've been great but I was nowhere near the tracks. Then I found a sheet of old steel that made an excellent spade; MacGyver would've been very proud of me. I suspect that if I'd changed into my checked shirt things would've gone much faster (MacGyver always had a checked shirt).

Soon I was shovelling in good dry gravel and had made a sort of runway out of sage brush. I hopped back in the car and eased it back a little, then filled up the fresh holes. I then eased it forward and… it gripped! There wasn't much traction, but there was just enough to give me a bit of momentum and get me out of the soggy patch and onto slightly firmer mud/road.

It sure felt good to be on terra firma again! Here I am on a "good" patch of road; even here you can see how squelchy the mud is. 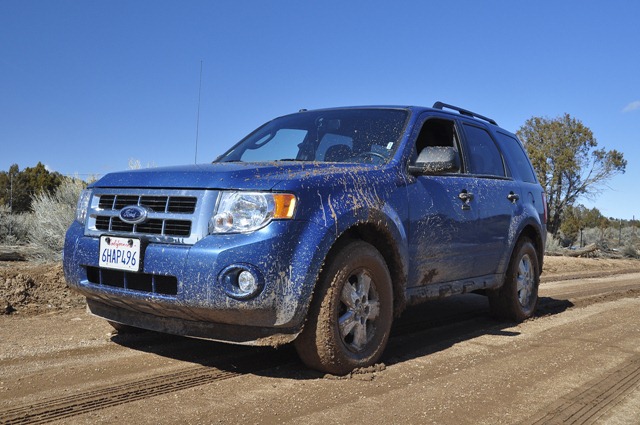 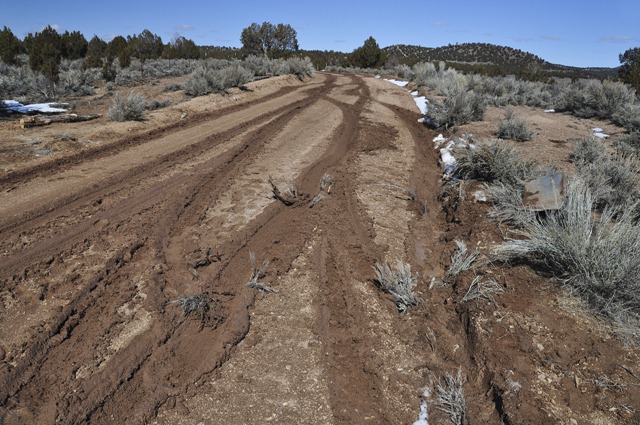 I found a slight short cut down a road that still had a layer of snow; the snow is much better to drive on, no slip at all. Go figure. I also managed to get around the massive puddle with no real problems.

So much for railfanning! I decided to leave Clover Creek Canyon until the Fall; the colours will be better then, not to mention the roads! The road I really wanted to go down hadn't been plowed and was still covered in a layer of snow; out of curiousity I tried driving the first patch; I averaged 3mph. For the 6km road I would've been looking at at least 3 hours return. A trip that long through unplowed snowy roads is just asking for trouble. Again; I'll wait till Fall.

So it was goodbye Clover Creek Canyon and on towards Utah. As I drove along the road a bunch of deer jumped out in front of me; my they are big! Quick grab shot through the mudscreen: 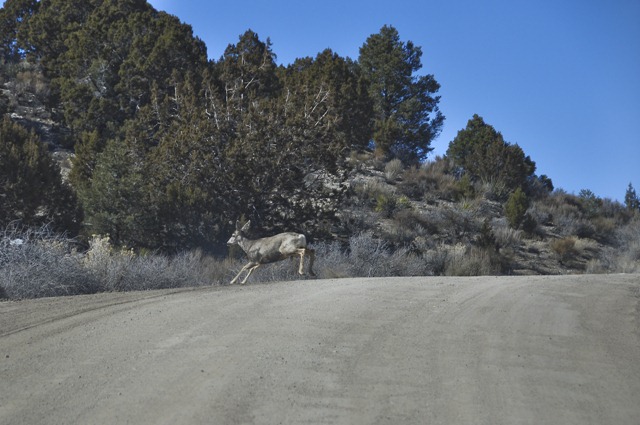 Driving towards Utah was amazing. 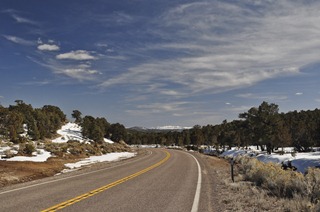 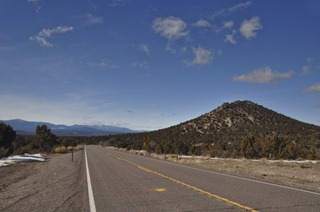 Lots of snow up here, and lovely little pine trees. Very very pretty, once again Nevada has turned on stunning scenery. I arrived at the town of Modena which I thought might be a good place to spend the night, only Modena had a little surprise for me: 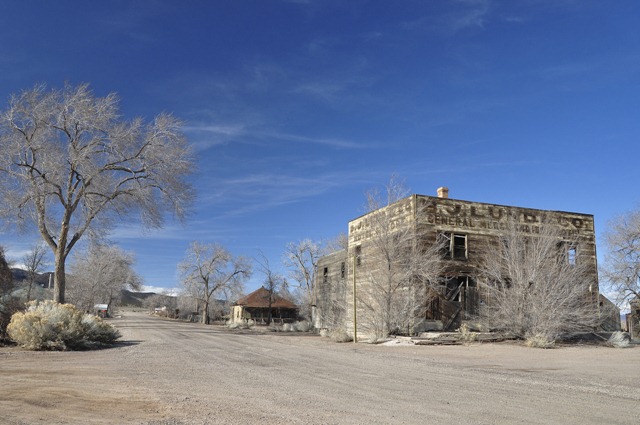 Welcome to Modena. We're the real life version of every Western movie set ever constructed.

See Modena is ever so slightly a ghost town. Here is a look around: 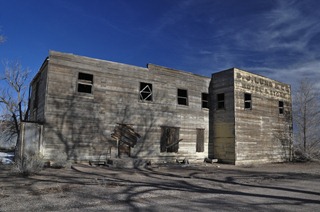 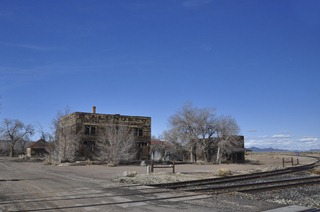 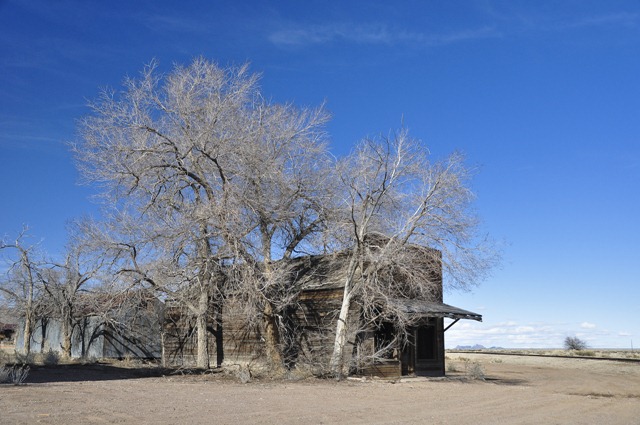 The colours here were amazing. Just shades of silver and blue. It was very beautiful. Even the turning triangle looked like something out of a Western movie set.

I had a look around and thought it'd make an excellent scene for a train shot, if only there were some trains around. As usual the UP LA-SL line was dead quiet. I continued slightly up the road to the overpass and thought that too would make a great photo location. For some reason I parked and walked back to scope things out. This is the view going over the bridge. Oh and we're in Utah now; I can tell because of the condition of the roads. 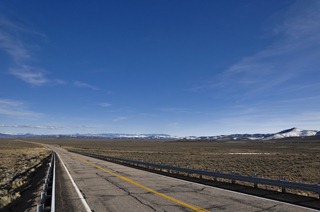 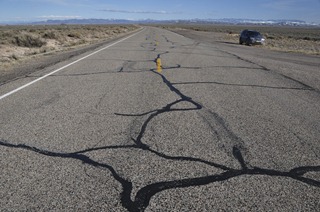 As I stood there gazing out I thought I saw something in the distance; got out my camera/telescope and had a look but no just some trees. But then… down a bit, over to the right… that black line… could it be? Surely not? No, it's definitely moving… I kept watching and it certainly had the characteristics of a train. I moved for a better view and couldn't see it any more, but if I strained right there on the edge of my hearing I could hear the beat of 2 stroke diesel engines. After 15 minutes of intense listening and peering later (by which time I was wondering if I'd imagined it all) the locos finally popped into view from behind a hill and it was all on! 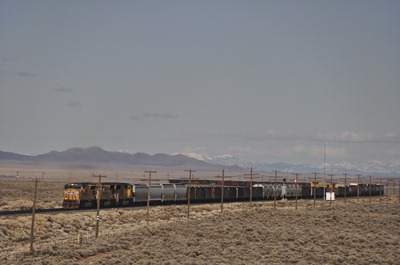 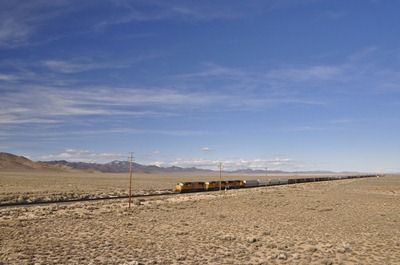 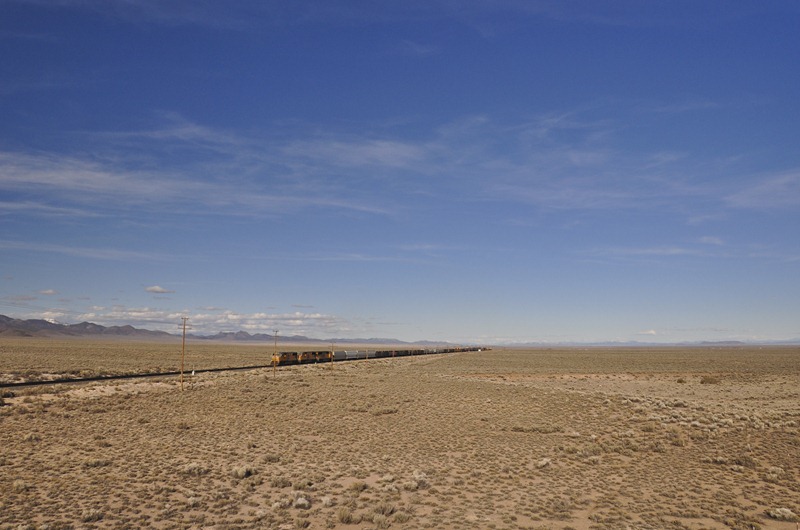 Now this is desert railroading! Humongous open spaces, ringed by mountains, long trains, vast open skies… yes, this is what I came for! Even got a friendly toot, I guess the sight of a guy standing on a highway railing at an overpass was a little unusual.

Apart from the lamppost right through the centre of the cab (Photoshop will fix that) I'm very very happy with my shot.

I continued on towards Cedar City, which I swear the sign said was only 6 miles away but an hour later I was still driving. At least the scenery here in Southern Utah was up to scratch. 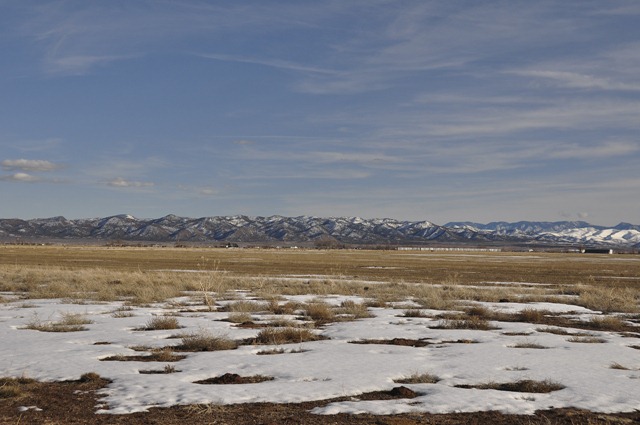 Reminds me of the farmland out Springfield way. 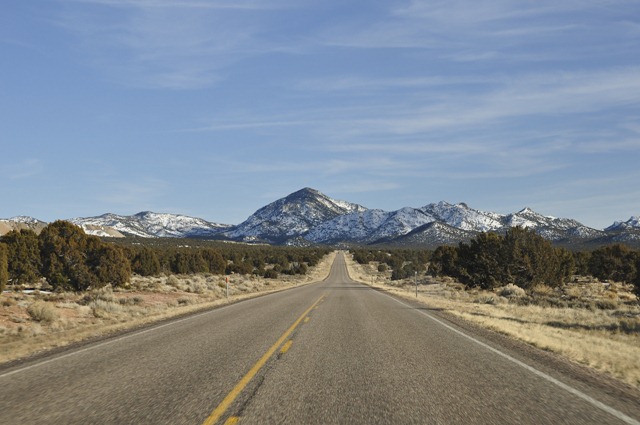 Arrived in Cedar Springs and was a little put off by the lack of independent motels, but then I turned into Main St and was bombarded by choices. "VALUE INN, Low rate in town! $25/night" cried the sign in poor English. Wheels squealed and I had a room. $25/night down here gets you a perfectly reasonable room in the carwash district of town, which will be very handy come the morning; there are several inches of mud I'd like to remove before returning the car, and returning a car with mud inexplicably all over the bonnet would be a hard one to explain. "Off roading? No, not sure where you'd get that idea from!" If I wash it now and return it with a week of gentle highway grime on it, they'll never suspect a thing; that's the plan at least.

Popped down to Top Spot for a lovely Dino Burger and fries. Only in America can you pull into a petrol station, top up your SUV and get a Dino Burger all at once. I'm not sure where they get their dinosaur from, but for $5 I'm not complaining.

So early start tomorrow to wash the car and my clothes; luckily the laundromat and car wash are in the same building. Only in America? Then it is off towards Provo, Utah where there is a model shop with my name on it. Stay the night in Helper? We'll see.