What a day! Started off by washing the car. Fun fun, I love American DIY carwashes with their dozens of different modes, but dang it took a lot of blasting in the water blaster to get all the caked on mud off. Afterwards the car was nice and clean but somehow all that mud ended up on me. Hmm.

Hit the I15 and headed for Salt Lake City. Looooooong unexciting drive. Saw a military Hummer with two massive antenna on the back, looked like it was a trolley bus they were so huge. Inside it was bristling with radio gear, looked pretty neat. 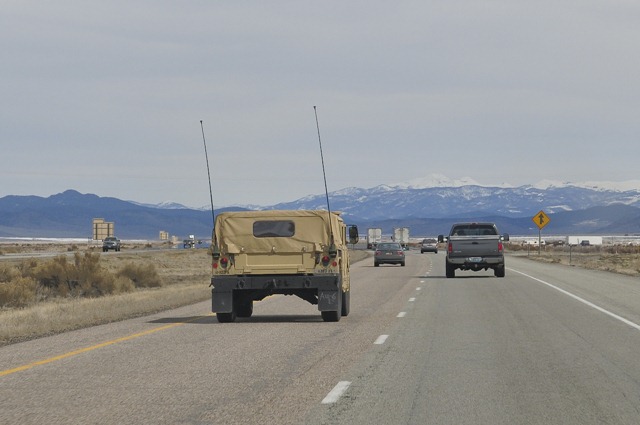 Continued on, got some petrol, had a stretch, saw some mountains, saw some HV transmission line towers that looked like space invaders… 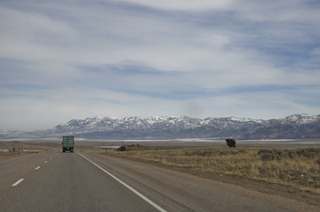 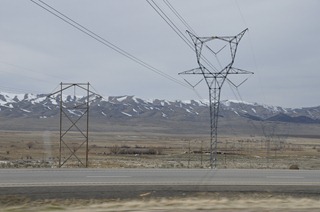 As I drove on the mountains started to grow up around me, and I saw with a smile that there was some sun over East, about where Helper might be…

Arrived in Orem and stopped at a petrol station to look up the model shop — exact same procedure as last time, and I think even the same petrol station. Took the scenic route there and before long I was standing outside Hobby Stop LC (they boast that they're cheaper than therapy!). Went in there and emerged a while later with 5 new locos (a 3 unit Santa Fe streamliner in warbonnet scheme, and 2x Dash-9s in warbonnet and swoosh schemes), and with a few wagons. I love that model shop, they always have a great range and their prices are very good. The owner handed me a flyer for a train show up in Ogden tomorrow… I was planning on going that way anyway, so maybe… :)

Then it was on to Soldier Summit. While navigating the endless roadworks on US 6 (they've been fixing or altering something every time I've driven that road) I suddenly noticed a bunch of NVPX coal cars rushing past me, but missed the locos. Passed the wind turbines, they were looking good today. Pulled over at Thistle to look at the tunnels, just the right amount of snow to make a stunning photo, if only there were a train. The road shoulder was very muddy so once again my car is muddy, sigh. 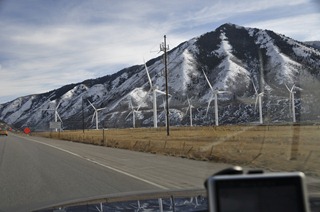 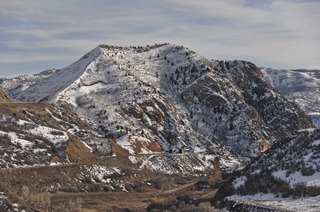 Windmills along US6. Look carefully and you can see them reflected in the bonnet / Tunnels at Thistle. Lovely spot here.

Onwards I continued, tracks were looking very empty. Then around Gilluly Curves I noticed some tank wagons sliding along and SNAP — I have a train to chase! He was heading my way too, so I zoomed on to Soldier Summit where I set up a ready to pounce. And here he comes…

Looking good so far. As the train passed the engineer leaned out the window and yelled something, but I didn't catch it, wonder if it was due to the two massive locos slogging their guts out!? I gestured I couldn't hear him but he made a T O sign with his hands, which I took to mean time out, i.e. he'd stop and there'd be a crossing here. Which thinking about it now makes no sense because it's all double tracked here. Oh and here comes the DPU, catching the light brilliantly. 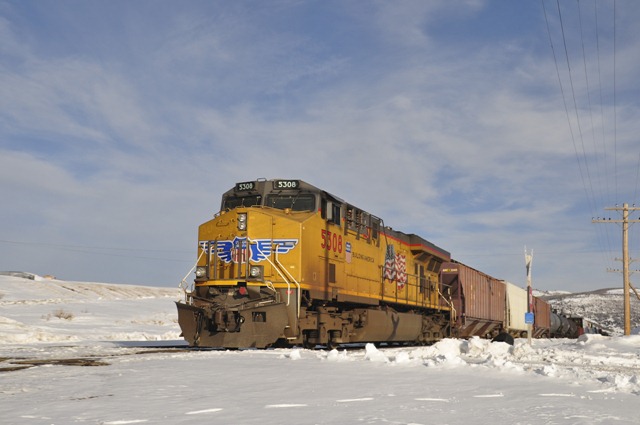 I packed up the video camera and hopped in the car where I caught the tail end of "scanner.. train orders" on the radio. Hmm… TrainOrders you say, I wondered if he was a regular there maybe? (TrainOrders is a train discussion group with an remarkably high quality of discussion).

I pressed on and caught him going through some S curves along the Price River. 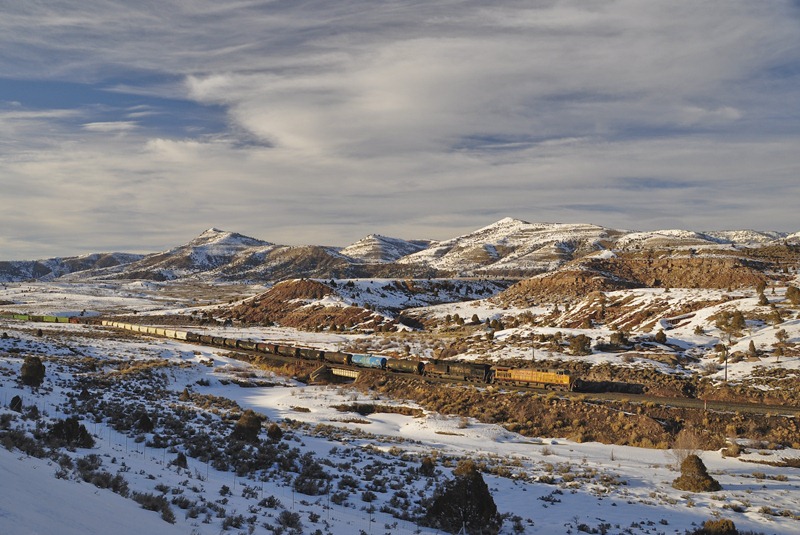 Nice? What can I say, the weather was perfect, the lighting was perfect , the snow was perfect, everything just fell into place. Around another S curve he went… 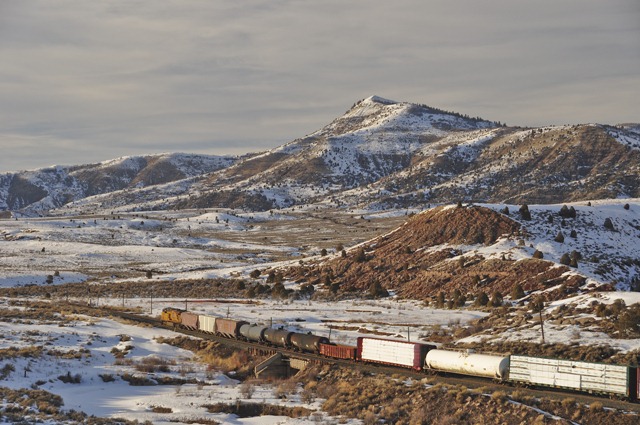 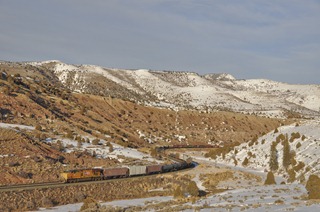 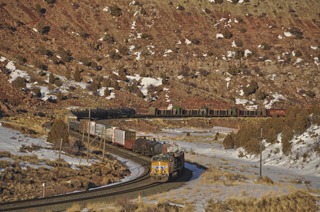 As the DPU rounded the curve it caught the sun and lit up beautifully. I whizzed on to Emma Park Road where I managed a rush glint job, and one out the other side, but it was a bit late in the day light-wise. 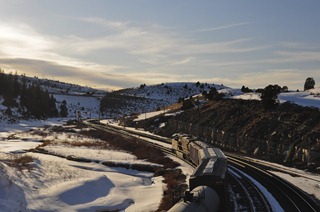 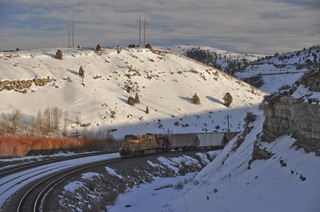 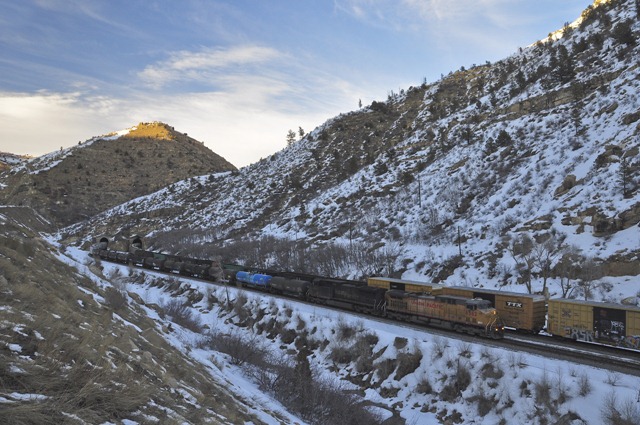 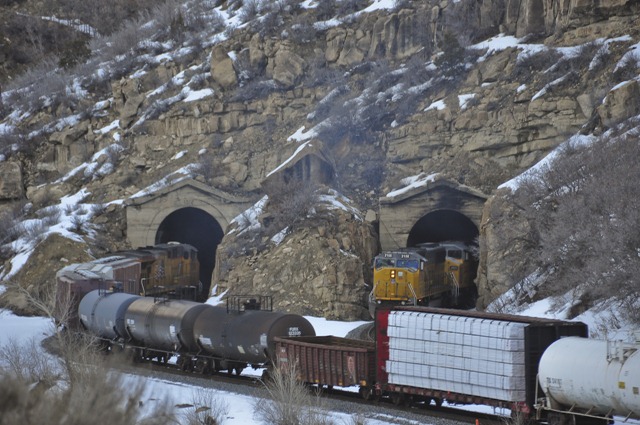 I got my meet after all! EB DPU, meet WB DPUs. Niiiiiice.

There were two more shots I wanted. One at the old D&RGW signal tower (which won't be there for much longer I dare say), and one at the motel. 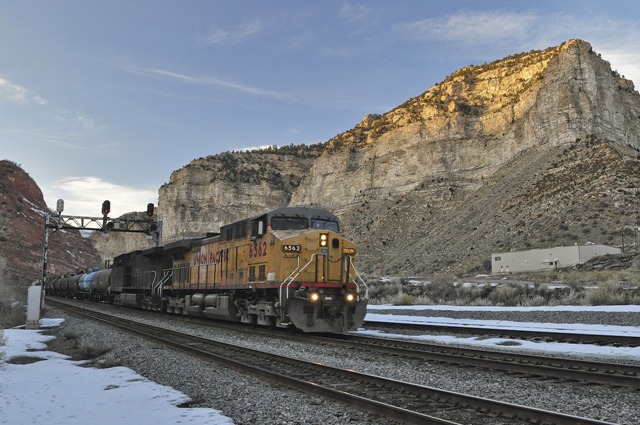 One down with a lovely evening glow on the rocks. This time I heard quite clearly on the scanner that he'd meet me in the Helper yard. Ooooh! Cunning guy, using the radio suspecting that I'd have my scanner on. Very clever :-) 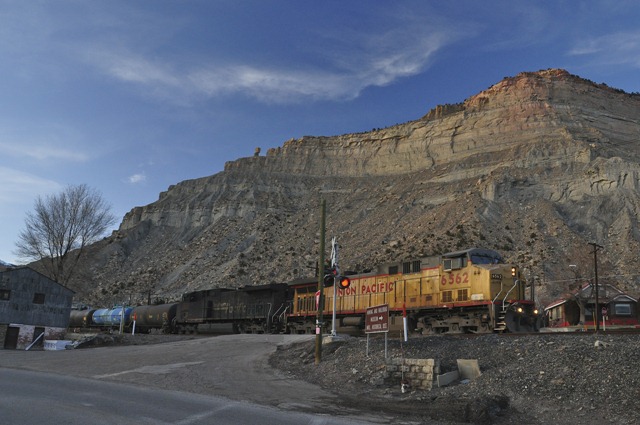 And this time, no cars bust in on my shot, awesome. You know there are worse things in life than having this view from your motel room :) And speaking of great things, while I was chasing this train I had Prairie Home Companion on the radio, listening the ultimate penguin-in-a-tuxedo shaggy dog story. Saturday afternoons on Soldier Summit can't be beat.

Having bagged my shot I headed down to the Helper yard where I met the engineer, Jerott, a really great, kind guy. Turns out he'd seen me encouraging a few others to hunt Soldier Summit today, and I'd made mention of my blue SUV. He put two and two together, hence the TrainOrders references. Turns out he is a fellow Nikon user too, so we had a good chat and he was stoked to see the shots online of his train.

Checked into the motel, Mark was glad to see me again as ever. Headed down and got dinner at a very busy Balance Rock Eatery and had a local hefeweizen beer. Did a quick scan of the railway yards on the way back to the motel; Thirteen locos sitting there! Blimey.

What a day! Very very pleased with the results, and was great to meet Jerott the loco engineer. Utterly exhausted now.