Was very tired this morning, something to do with the AC6000 idling outside my window for half an hour while the mid train helpers were cut in; all just an hour after I'd fallen asleep! Poor me was in two minds, on the one hand I was very tired, on the other hand, the rumble was amazing and I felt like I should be out there videotaping it all, although it was night time so there wouldn't be a whole lot to see. But the sound! I could feel it through the bed! For a diesel-head it was pretty amazing.

Anyway woke up and packed everything away, said goodbye to Helper and was on my way. Beautiful sunny day out there, glorious blue skies and wonderful patchy snow everywhere. Stopped at the ice-fall on the way up the hill. 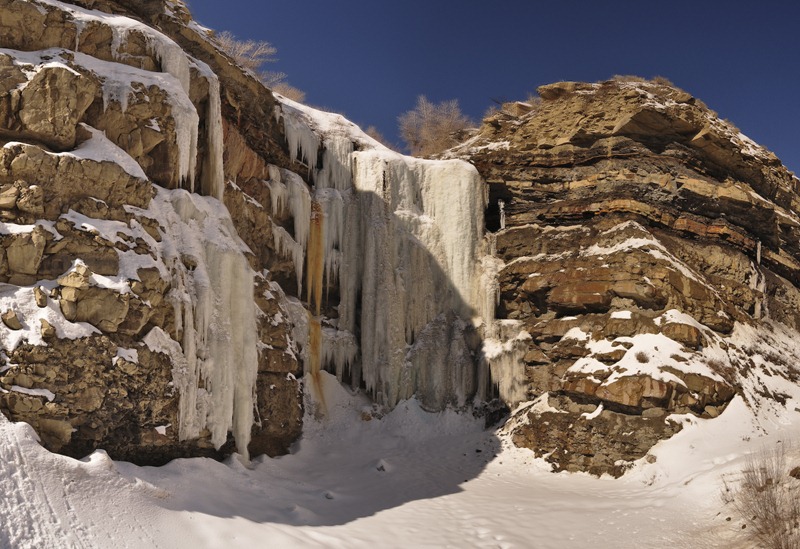 Now that is ice! We're talking 30-40 ft high here, as high as a two story house. Oh and the sun was wonderfully warm, but the wind was ferocious! No trains to see, but the scenery was amazing as ever. 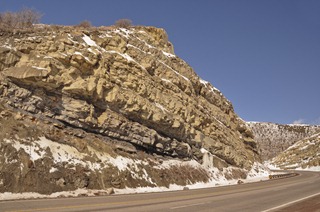 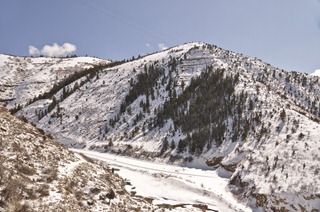 Cruised on up, over Soldier Summit and down the other side. As I passed Gilluly Curves I wondered if there were any trains hiding in there, and with that my scanner blipped as it picked up the FRED (flashing rear end device) transmissions and suddenly there was a loco roaring right under me! Pulled over and watched the UP manifest crawl up the hill, then as I watched another up hill train emerged at the top of the curves! In the space of a minute I'd gone from no trains to two trains duelling it out on the curves. You'll have to squint to see both trains. 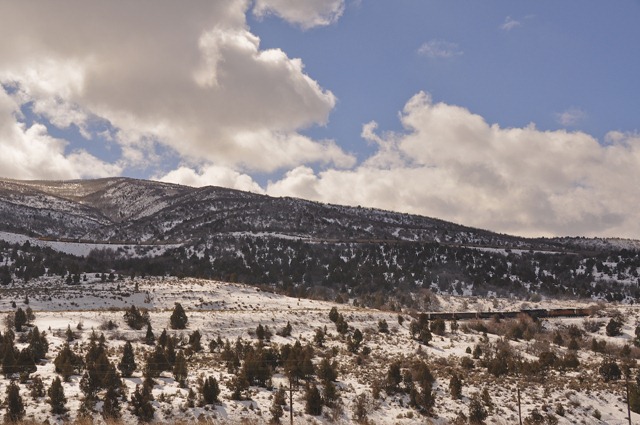 On I went past the endless roadworks and into the greater Salt Lake City area that stretches form Ogden to Provo, and probably has 95% of Utah's population. They may not have theme parks and roller coasters in Utah, but I tell you, that I15 is quite a ride! First time I drove the I15 it scared the #$!@ out of me, especially when there are 7 lanes with 3 more joining form each side, cars driving diagonally from one side to the other, road works, spaghetti junctions, and all at 110kmh+! But it was just fine this time, not exactly relaxing but not too stressful either. I can only assume Utah went road-crazy for the 2002 Winter Olympics.

Had a few model train shops I wanted to check out so worked my way through town doing them. None had the range or prices of Hobby Stop LC down in Orem, but I still bought a few wagons to take home.

I was now in Ogden and so turned to head up the hill. Refuelled the car and watched numerous fighter jets circling over the city on approach to Hills AFB. Continued up the hill and by now the sun was out and the hills looked amazing. 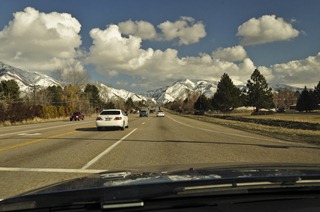 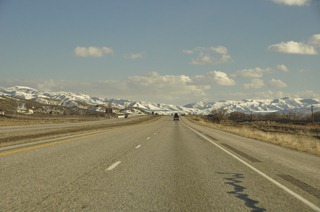 Weber Canyon was impressive, I suspect it is a real slog for the trains getting up there; you can see the tracks at right below: 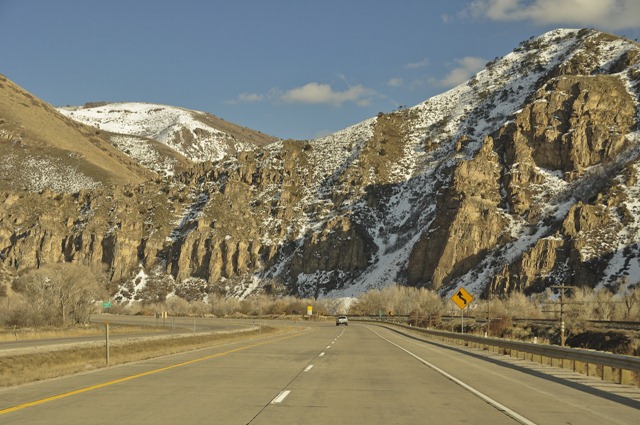 Arrived at Echo which is a pretty quiet little town; no more than a few trailer homes, cafe, and a petrol station. Last time I was there I caught a pair of SD40-2s with a lovely horn, but no sign of trains there today, just a few dying grain cars.

Continued around the corner to Echo Canyon and soon caught a train: 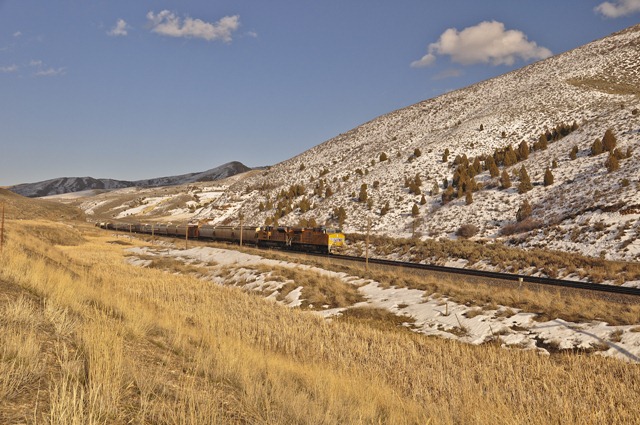 And as for why it is called a canyon: 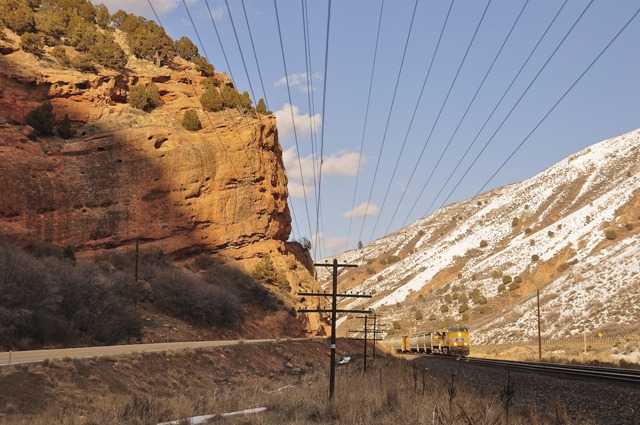 And then into the sunset: 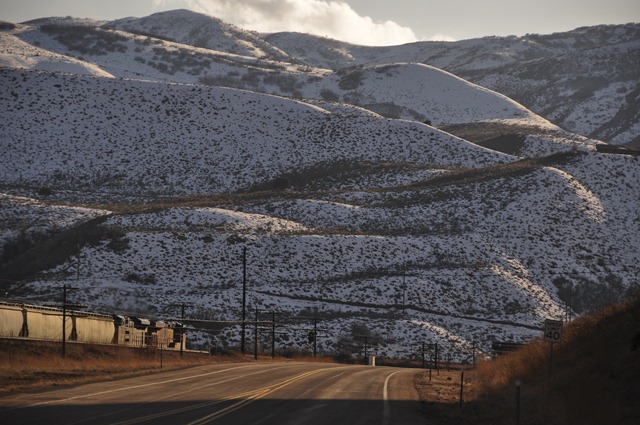 Drove on towards Wyoming where things flattened out pretty quickly; no more massive mountains, just undulating plains now. Arrived in Evanston and had a look around; much bigger than I was expecting, but no rail-side motels so I'm staying at what might be the only ma & pa motel left here. At $31.99 a night I can't complain, and it's a pretty nice room to boot.

Even though I'm only just in Wyoming there are already lots of cowboy references. I passed The Boot Barn on the way in, complete with a galloping horse sign with animated legs. Currently it's below freezing, there is a nice layer of frost on the car and it's very crisp outside.

Plan for tomorrow is to get up bright and early and take the scenic route back to Nevada across the top of Great Salt Lake; no trains there, but wonderful open scenery by the looks. I'll aim for Wells, NV which is a big junction point on the Union Pacific with some great, well, Nevada scenery around it. Obviously on the way out I'll pass through Echo Canyon again, so hopefully I can catch a few more trains there.