What does one do during the day in Las Vegas? Well unlike LA, the options seemed endless. Sky diving, machine gun firing, visitng headless statues, drive a digger, helicopter rides, etc. Of course the prices were also pretty endless. With all these options we did of course have trouble deciding what to do, so we went to Walmart and stocked up on junk food for the car. I suggested visiting the Atomic Testing Museum. The Atomic Testing Museum came about after the 50 years of silence around Project Manhattan came to an end and people started sharing their stories. It is an interesting mix of deadly serious and very quirky. 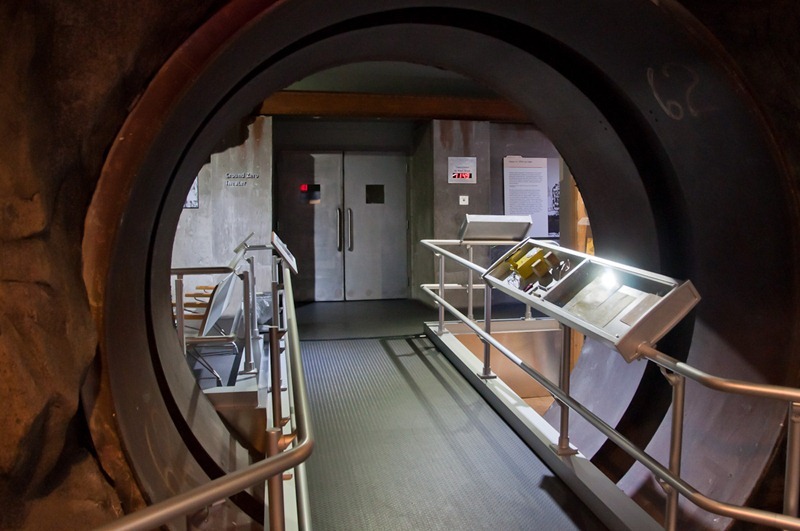 They have quite a few exhibits and artifacts, what I found especially interesting was some of the more technical measurement gear that had been retrieved from inside the caves where nuclear bombs had been tested. The gear was mounted on special shock absorbing springs (called "pogo sticks" by the workers) to prevent damage during the blasts. 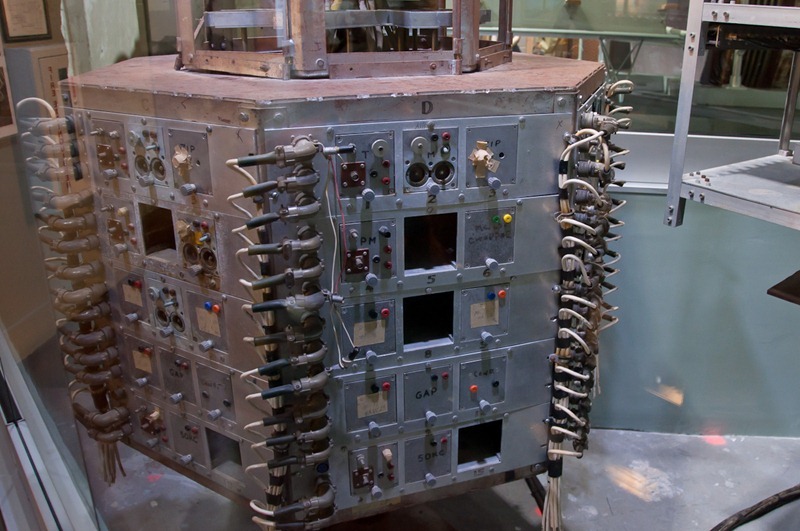 Having looked at aerial photos of the Nevada testing sites before I found it interesting how the tests changed over time. Initially they were conducted at Bikini Atoll, however this didn't work out so well, and they moved testing to an empty part of Nevada where they did above ground tests. Following international pressure they moved to underground testing where the radiation would (most of the time) be contained by the ground.

The problem with underground testing is that it's quite hard to see what is going on, so the clever engineers came up with a containment, well, container, that had special sightings that incredibly fast instruments could watch the explosion through. Within milliseconds of detonating the bomb these instruments and the entire containment vessel would be vaporised and combine with the now molten rock around the site. 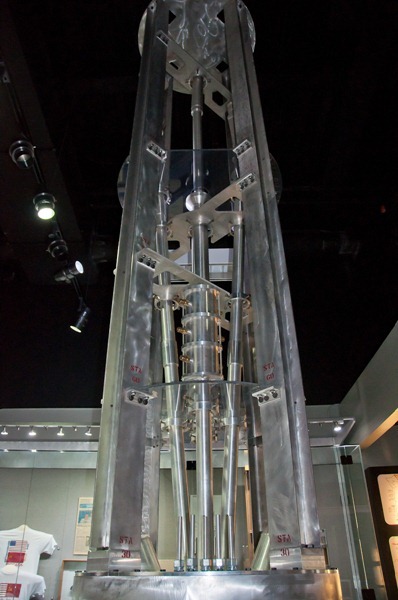 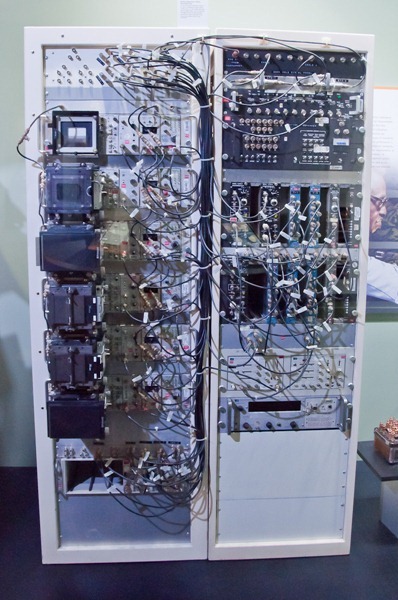 I found it fascinating seeing how the test sites were set up, and if you look hard enough on Google Earth you can find some sites still ready to go; they were just abandoned at the end of the nuclear weapons testing programme. 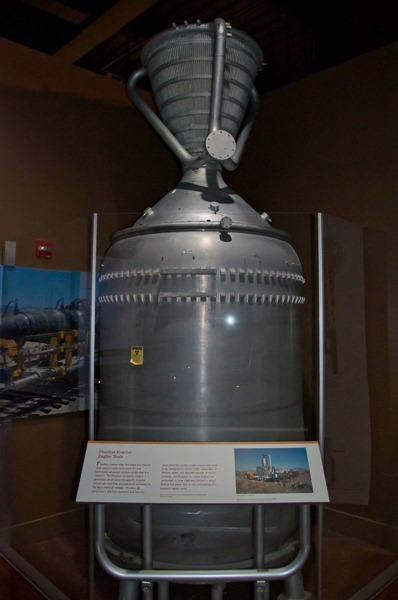 Among the exhibits they had was a working Geiger counter with a number of radioactive sources set up, like a radium clock dial, blue china, water (not radioactive) and so on. They also had a disc with different shielding materials, like paper, leaded glass, etc. 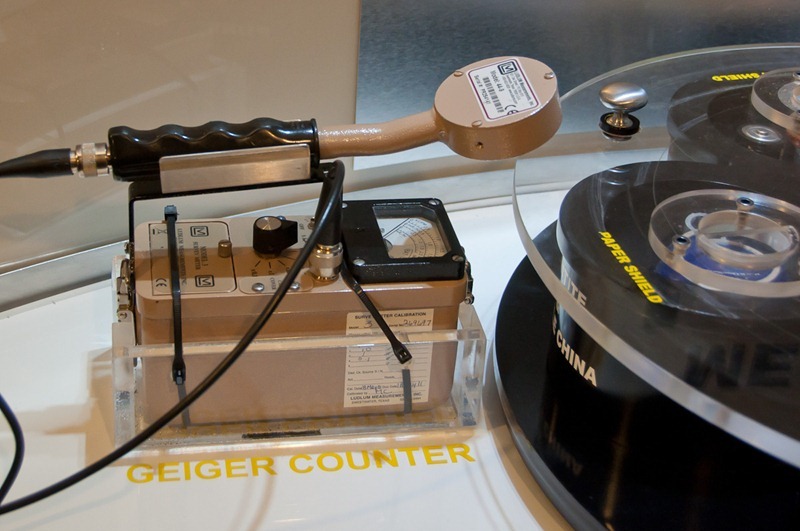 I had fun trying different combinations and hearing the Geiger counter ticking as it detected differing amounts of radiation. It turns out my arm is slightly radioactive too, although before anyone worries about my close encounters with Fukushima, my arm is no more radioactive than the rest of the room, i.e. it was just picking up background radioation.

They had some great photos and information set up. The info on the radiation cleanup teams was fascinating. Area 1 in the Nevada Test Site is still contaminated and used as a live training ground for first responders, as in, there is still very real radioactive material there. Fascinating! 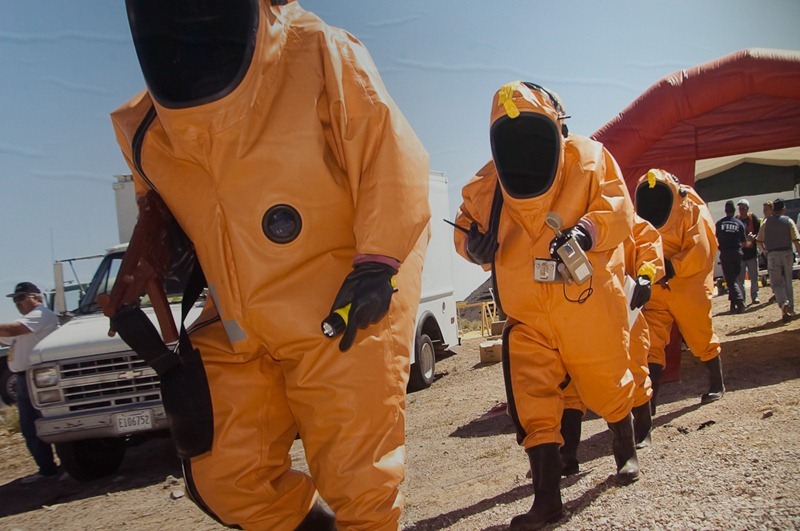 They also had a real B53 thermonuclear bomb, although without anything inside it of course. It was pretty big; Wikipedia has this to say:

… a 9 megaton blast would result in a fireball with an approximate 4 to 5 km diameter. The radiated heat would be sufficient to cause lethal burns to any unprotected person within a 28.7 kilometers radius. 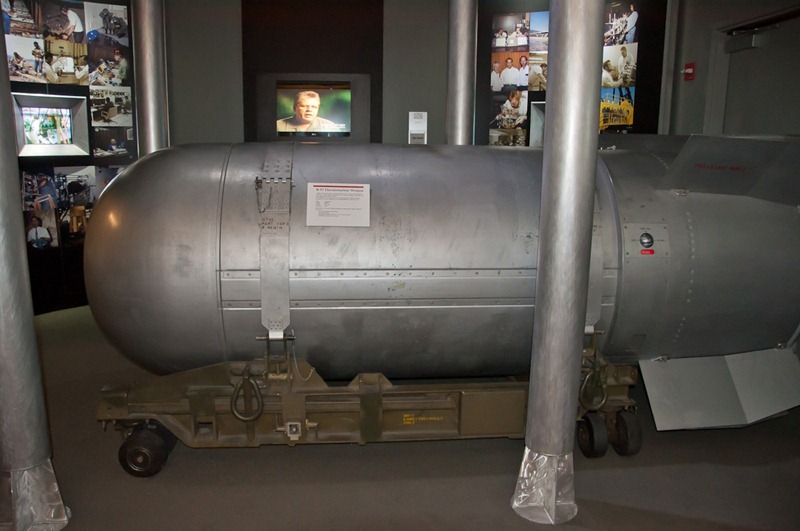 After the museum we went back to the motel and planned our night out in Vegas. Henk had prepared an itinerary of what things to see and when, although we hadn't factored in monsterous queues and ended up having to modify things a bit. Or visit up the Eiffel Tower was cut short by a 50 minute queue. We went looking for food and our attempts at a Vegas buffet were also cut short by huge queues. We ended up having some very average, very overpriced pizza from a food court.

After that we watched a few free shows, such as the Sirens of Treasure Island which was pretty underwhelming in terms of narritive, but the actual execution wasn't half bad with sinking pirate ships and so forth.

The one thing we did pay and queue for was a ride on the roller coaster at New York, New York. Having never been on one I wasn't sure what to expect but figured it probably wouldn't be that scary. Well I quickly changed my mind when we started falling down a very rickety feeling track at close to 1G, before being flipped upside down, held at right angles over a gaping void, then spun head over heals in a 360 loop. The only consolation with these things is that presumably they're safe or they wouldn't still be operating it.

After that we wandered around for quite a while, looking for real flamingos and so forth. After a while all the casinos start looking the same though with endless floors of slot machines blaring music. It was nearly 2am when we finally got to bed!