In between my usual adventures I always have about 10,000 projects on the go. Lately some of these projects have been getting rather "lofty", in a series of high altitude ballooning experiments.

My eventual goal is to attach a camera to a helium filled balloon and take photos of the earth from way up above the clouds. It's been done many times before and there is nothing new about it, but it's still fun to try, and not without many many challenges. It doesn't take an genius to work out how to tie a camera to a balloon and let it go; the challenge is to get the camera back again at the end!

So for some time I've been pondering how to do this, and then one day something clicked and I started making it happen. The first thing I decided was that I needed some way of knowing where the balloon was, which meant some kind of transmitter. Without a radio license though I am fairly limited in how much power I can transmit with, and power means range, so I did some testing. For some reason I decided to try the very cheapest unlicensed radio transmitter one can find, a $10 433MHz transmitter the size of a fingernail.

I built up a transmitter and tested it from my balcony. Happy that I could pick it up from across the park, I went and hid it in the grass near Sugarloaf, in the shadow of the TV transmission tower there. By putting it near an obvious land mark it would be easy to aim the antenna towards it. 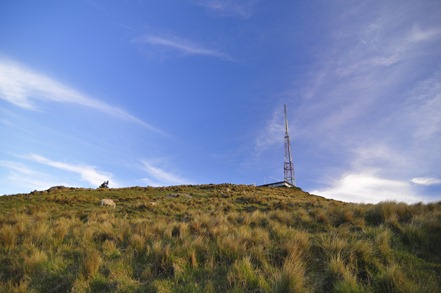 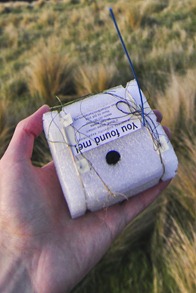 I drove down the road a bit and pulled out my massive Yaggi aerial. As soon as I turned on the reciever I could hear it beeping away. I headed on down to the beach: still getting a perfect signal. It was only when I was beyong the edges of Christchurch, at Saltwater Creek, that I had trouble decyphering the signal. Line of sight that distance is about 35km, all off a transmitter powered from a single AA battery! 35km is far enough away that curvature of the earth and intermediate undulations put Sugarloaf out of sight, so my lack of single had more to do with intermediate obstructions than the power of the transmitter. 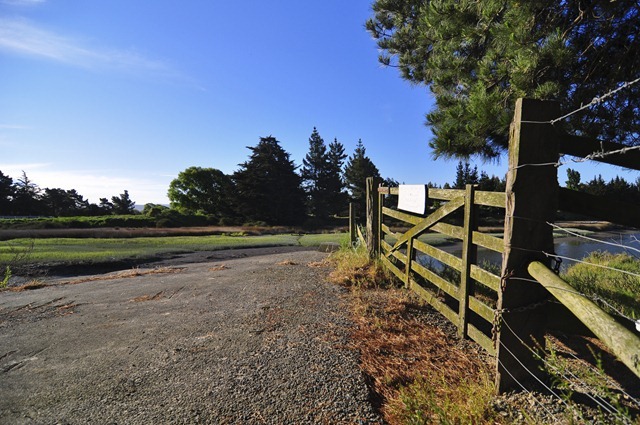 So having well and truly verified that a 10mW transmitter (about the same strength as your garage door opener) could transmit across incredible distances, I moved onto the next phase.

Reading up on antenna design I was still unsure on a few things, like would my transmitter work once airborne without the earth acting as a ground plane? So I set about building a transmitter designed to get airborne.

The transmitter was the same as before. This time I used a small PicAxe microcontroller I had lying around and added a temperature sensor so that it could broadcast something interesting for me to listen to. 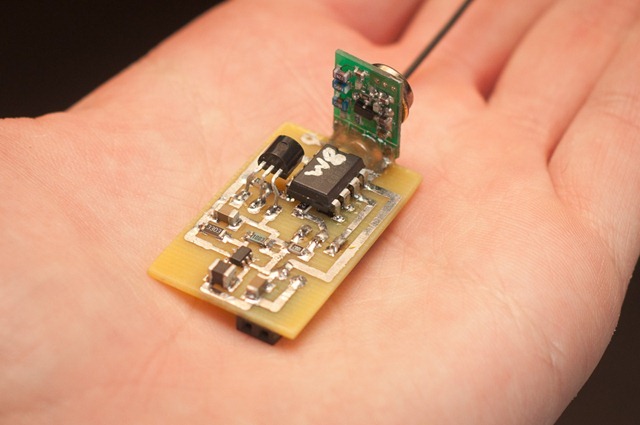 The completed circuit weighed 6 grams. To this I added a battery (8 grams), and put it inside a film canister (6 grams) with a wee bit of insulation and a note in case someone found it.

I then took it downstairs and bunged it in the freezer to make sure it worked at sub-zero temps. No one seemed worried I was pointing a 4 foot anenna at the freezer. 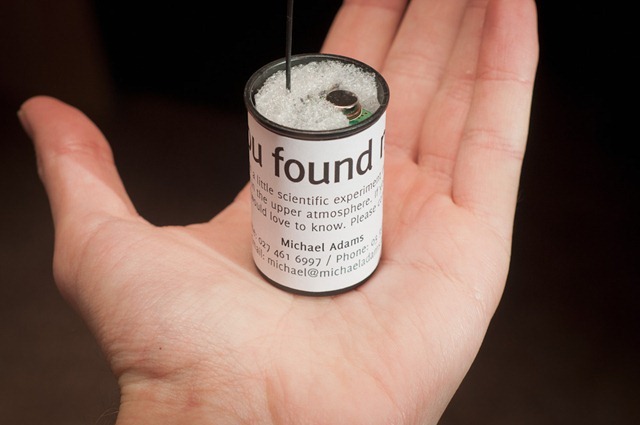 And so the next day I bundled up my bits, bought a bag full of inflated party balloons and headed off to Ashuburton. I found a quiet side street free of any nearby hedges and power poles and soon enough my little cannister was off on its way. The farmer was rather curious what I was up to. 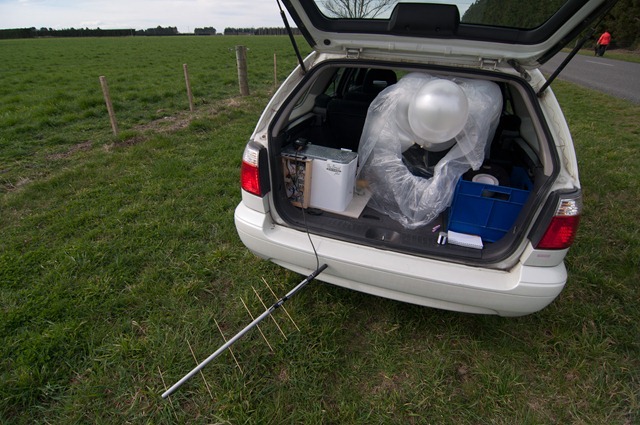 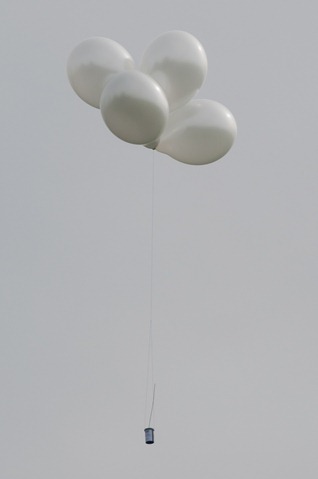 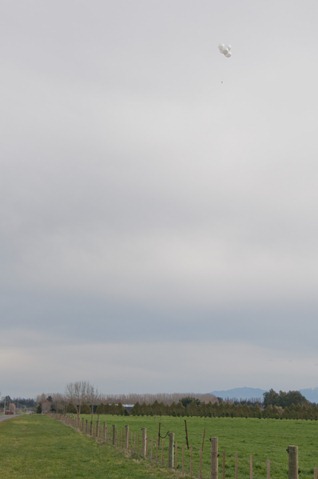 I tuned in my receiver and started jotting down numbers. I quickly lost sight of it, but the numbers kept coming in strong. Soon it was down to below zero. While I didn't have a GPS receiver on the probe, I could still do some crude radio direction finding to work out it's approximage heading. I ended up waiting at the end of a small track on the shore of Lake Ellesmere, where I managed to get the car stuck while doing a 30 point turn on an impossibly narrow spit of land. After digging it out of the mud and swallowing a couple of lake flies, I went back to track it. It was now down to -10ºC and somewhere over the ocean. 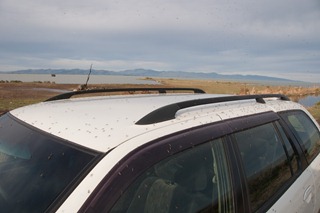 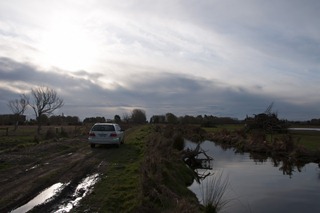 I caught some sleep as the hours dragged on. 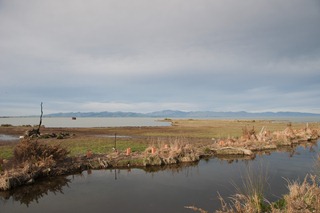 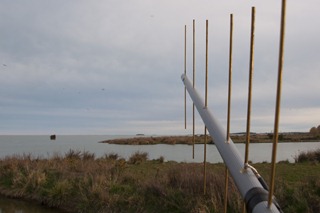 My Yaggi antenna, fashioned out of brass rod, epoxy glue, and a length of broom handle. Works incredibly well!

Eventually around 6pm as the light was beginning to fade the transmissions abruptly changed tone and it started transmitting a short beep over and over again. Soon after it went silent. The final transmission had recorded a temperature of -14ºC!

Back at HQ I ran some numbers and estimated the final height as 5000m above sea level! Not bad for $15 worth of components, and $15 woth of helium! Looking up some datasheets I found that standard alkaline batteries are only rated to -18ºC, and so what most likely happened is that the battery started to freeze and the chemical reaction that produces the electricity would've slowed down, until it was barely enough to power the device. As the transmitter is a simple OOK (on/off keying) device whenever it turned on it would've caused a power surge, which would cause the battery voltage to droop below the minimum input voltage for the boost converter, in turn causing it to cut out. This would've caused the battery voltage to rise back above the minimum input value, where it would've turned on and started supplying the controller and transmitter again. When the transmitter started transmittng again the voltage would've quickly sagged again, causing an endless loop and hence the continuous short beeps over and over that I had heard.

Based on that day's Balloon Trajectory Forecast, the probe most likely took a route that quickly put it out over the sea, and then beyond Banks Peninsula. This pretty much matches what I'd seen out in the field. The reason it changes trajectory is that as it rises, it passes through different weather bands, and eventually hits some very strong high altitude winds. At 5km my probe was still shy of the jet stream, which starts at about 7km altitude. 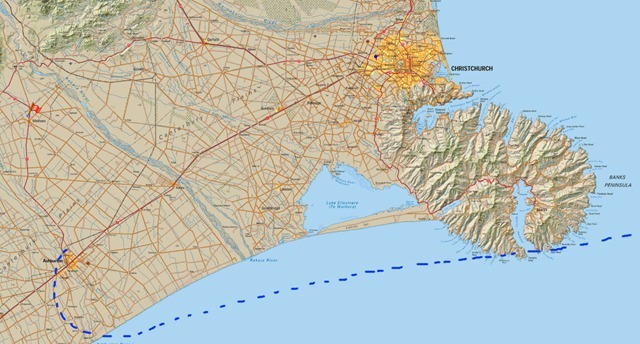 I declared this a complete success, as I had learnt much, and verified that my 10mW transmitter was more than ample for the missions I had planned. I learned that more lift was needed as my balloon rose very slowly, and better batteries that could withstand sustained sub zero operation. An improved transmission scheme that didn't rely on me manually decoding morse code would also be handy.

Within days I had started building version 2; stay tuned for more info…