At the end of the previous update I was busy waiting for a 5-8mm shaft coupling to arrive. However I realised that with a big of creativity, I could always steal one from elsewhere on the machine.

Using some heatshrink tubing, cable ties, superglue, and flexible tubing from an old inkjet printer, I bodged together this flexible coupling: 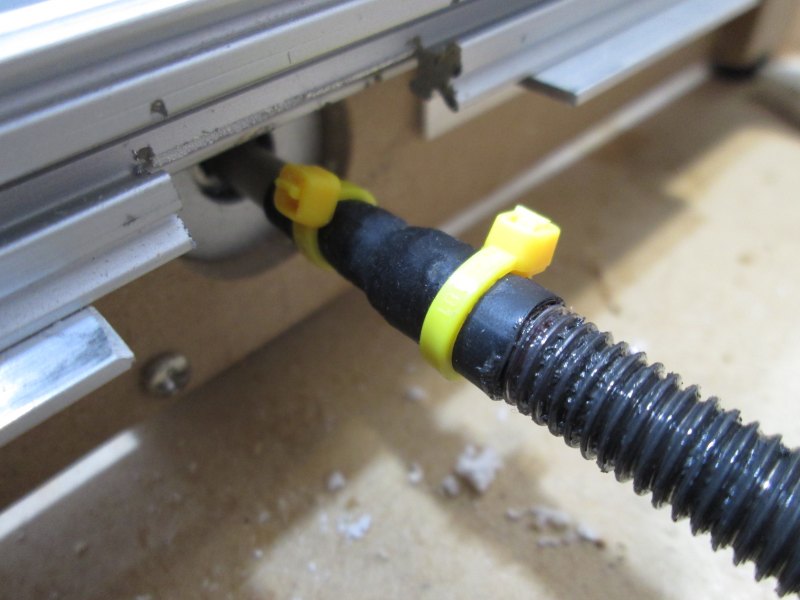 That left me with a spare aluminum shaft coupling, just what I needed to finish my new spindle.

The spindle I made out of MDF and consists of:

It went together reasonably easily with a good helping of 5 minute epoxy glue. 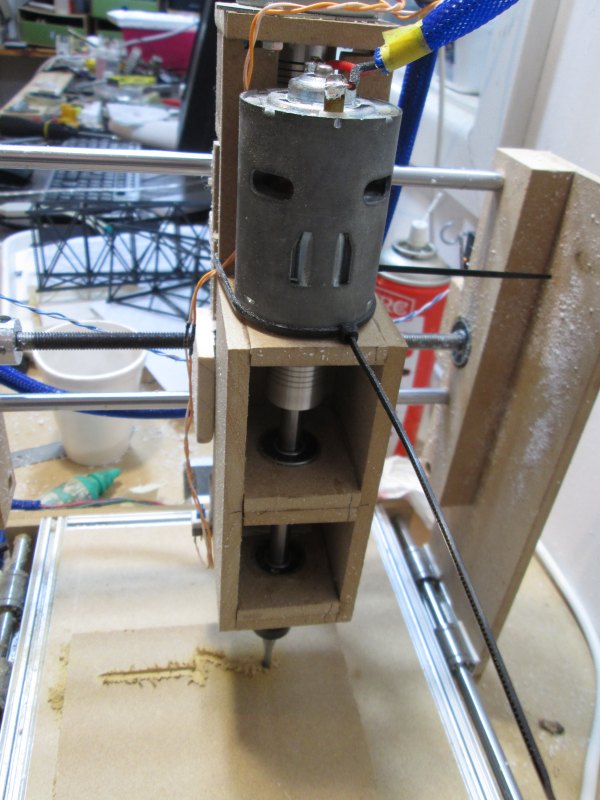 The hardest bit was aligning the motor and the shaft. If it's not perfect, it rubs and the power transfer suffers.

Meanwhile, a pair of 2 flute, 4mm HSS end mills had arrived in the post and I was eager to test them out. I chucked up one of them and let it rip.

Initial impression was a little underwhelmed. It was still far from perfectly centered and there was a noticeable amount of wobble. My 4mm bit was cutting a path 4.7mm wide. The power however was remarkable, easily cutting through materials I never would have tried on the poor-man's-spindle.

I did some reading online that night and realised, sigh, that there is a process you need to follow when using ER series collets. The next morning I rushed down and sure enough, I hadn't clicked the collet into the collet nut before attaching it. I redid it and it was quite a bit better, but still not perfect.

I tried again later that night, along with making sure the spindle was very firmly attached to the machine. Result? Zero wobble! 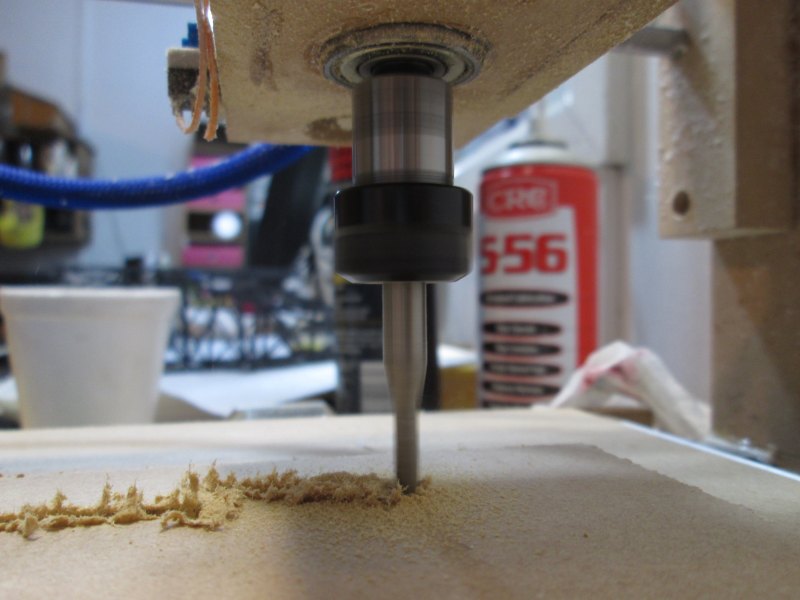 I did some cutting tests on MDF. I started off very gingerly at 10mm/minute cutting speeds, cutting down just a few mm per pass. It's quite a learning curve and there are a lot of things to keep in mind. I learned fairly quickly that it's critical to immediately remove the dust and chips from behind the cutting head, otherwise it clogs up and starts oscillating and failing to cut. Not good!

I also found that the cutting head gets really hot, hot enough to burn the MDF. By shadowing the cutting head with the vacuum cleaner the dust is removed and the smoke sucked away too, and the increased air flow helps cool the spindle.

Meanwhile the motor gets very hot. It is pulling down 4 amps at 15V, which is a respectable 60W of heat being dissipated. That's an entire light bulb of heat bubbling away. The vibrations on the motor are also fairly significant, causing it to undo its mounting screws over time. 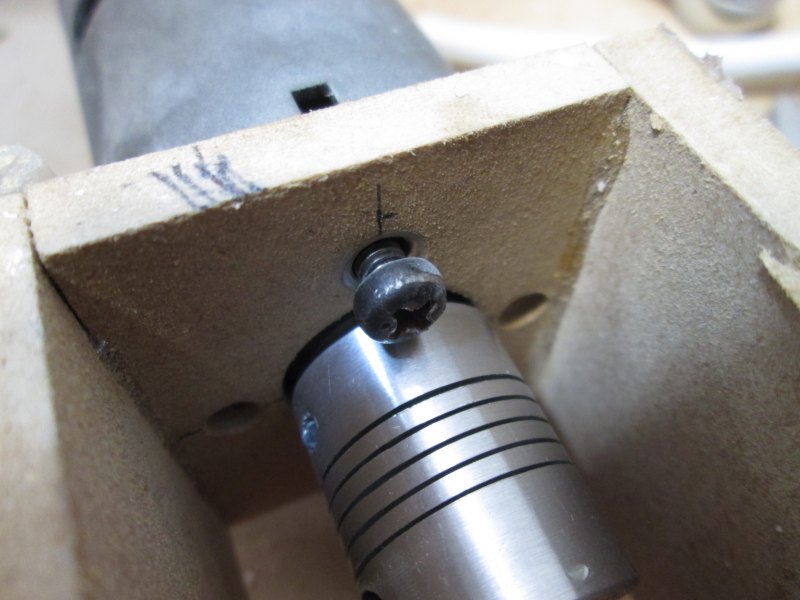 I noticed that with the screws loose it spun quite a bit faster, albeit rather noisy. So I remounted the motor with some hot glue, which I justified as helping to uncouple the motor from the spindle. What I forgot was that with 60W of heat coming out of the motor, it wasn't long before the glue melted, mid-job!

Despite all this, I did manage to cur some pieces. 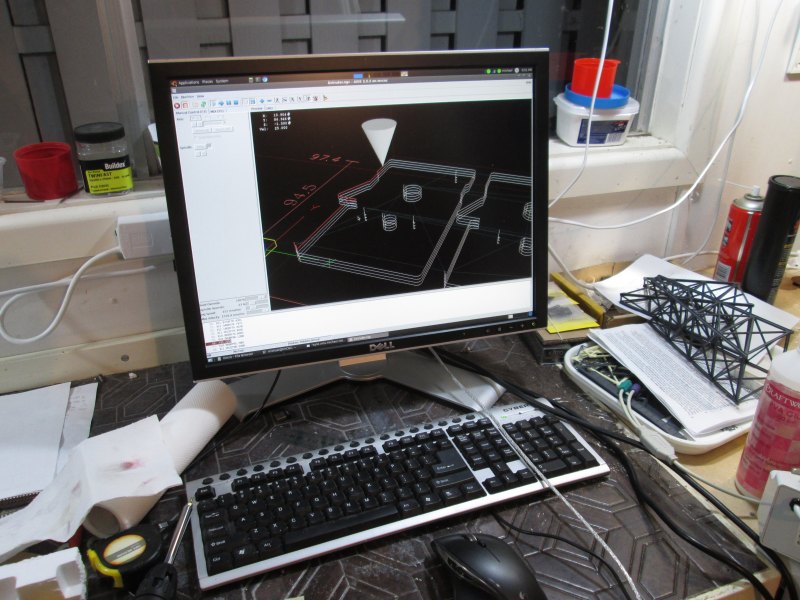 This is the control screen as MrCNC cuts out some pieces for my next machine. I'm getting very comfortable with LinuxCNC now, and I'm even getting the hang of GCODE, so I'm easily able to tweak the cutting template programs to suit my needs.

While cutting I noticed that the holes weren't very circular, and that the X dimensions seemed off. I quickly narrowed it down to my very-dodgy replacement X axis connection, which was starting to slip and had a disturbing amount of slop and play. Needing some fresh air, I went to the letterbox and in a stroke of perfect timing, a replacement flexible connector was waiting for me. 30 seconds later and: 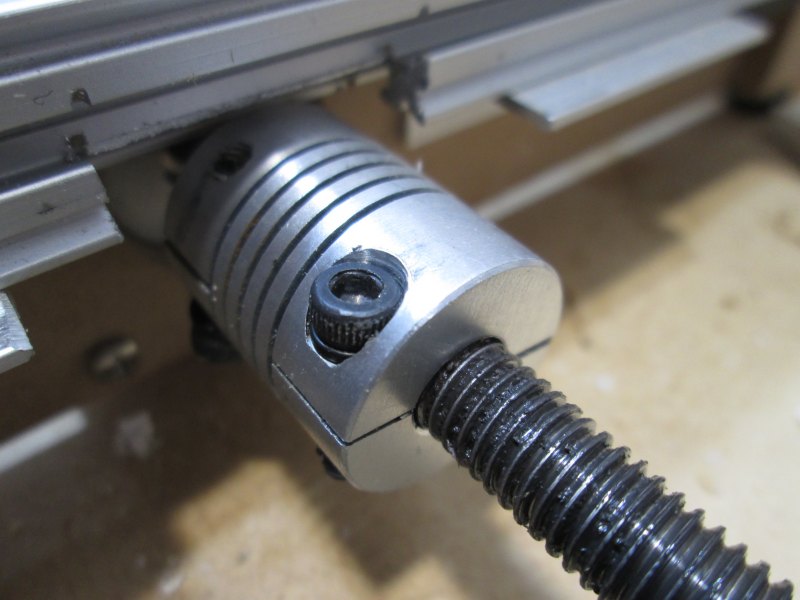 Much better! Everything was correctly-dimensioned once again.

Now I had a new problem; my spindle was rapidly shaking itself to pieces! Some lock-tight on the screws is badly needed, as is an improved connection to the rest of the machine, and a better, more-secure motor mounting system. My options are currently, in order of increasing cost:

The current system if good, but loud enough that hearing protection is a must.

So as I half suspected, making my own machines is very much like making a model railway; they are never quite finished! I also need to strengthen the gantry a bit, it's still a little wobbly which means I can't push the feed rates (speed the cutting head moves forward) up too high.

However, all that said, I had a very productive day of milling and was able to push the cut depth up to 3mm and the feed rate to nearly 80mm/minute, which means small items take only a minute or so to make. Definitely a good result. In the end I made 4 extruder plates, 2 pincher end plates, and 3 pincher inner assemblies, ready for my next exciting project. After a quick lick with some sand paper they look very good.

Thanks to the wonders of ebay, I have some more end mills on their way, this time finer ones so I can do some experimenting in plastic.