At last, a day of railfanning! Plan was to explore the BNSF Seligman Sub from Flagstaff down to Winslow as access here is much better than on the western side of the hill. So we set off towards Winslow, Arizona where we stood on a street corner, as per the Eagles song. 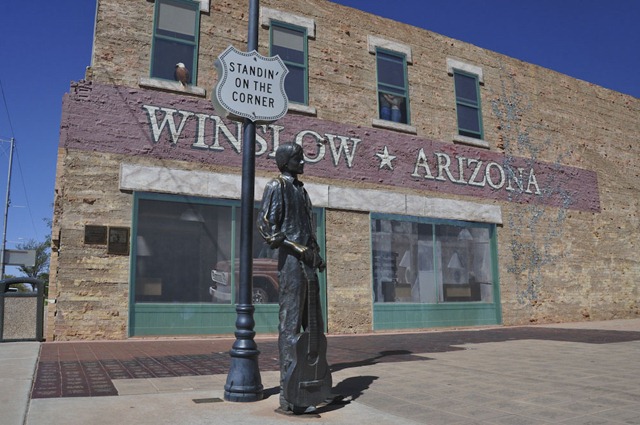 Oh and the building front is just painted on :-)

Had a bit of a look around Winslow; seems a lot like any South-Western town. The souvenirs on sale here were very uninspiring. Interestingly the scenery in the hour drive from Flagstaff to Winslow changed from rich Ponderosa Pine forest to never ending desert. For example here is the scenery on a short detour I took to try and find Canyon Diablo, but had to turn back because the roads were too bad. 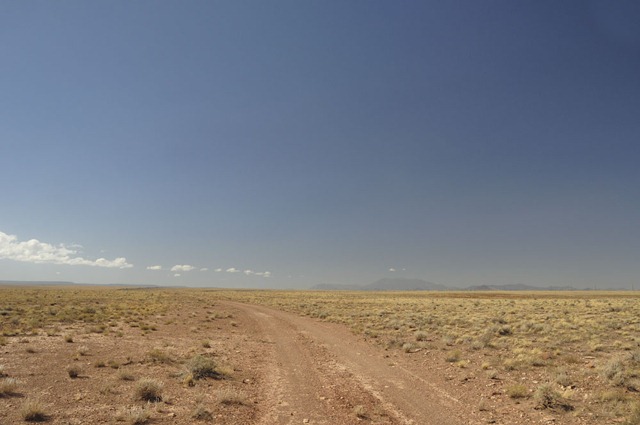 Back towards Flagstaff and caught my first train, an interesting mix of paint schemes running the local shunt: 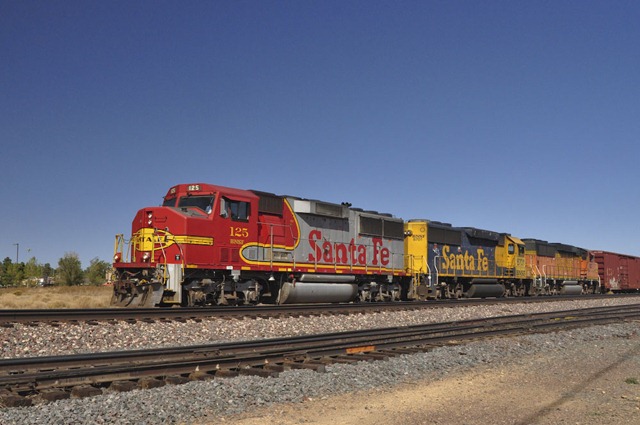 Shame the GP60 leading looks so ugly with its wide cab. Unlike GE who mastered the wide cab straight away, EMD took their time and produced many ugly versions along the way.

Back down the road caught a warbonnet C44 dash-9 leading another dash-9. I've really taken a liking to the warbonnet paint scheme, I find it very striking and clean looking. 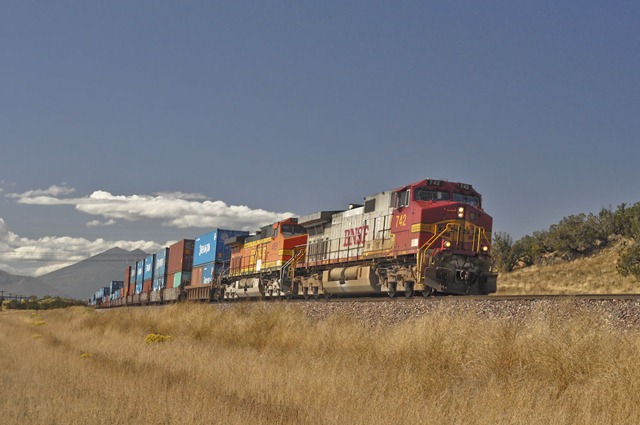 It's hard to picture how big the double stackers are, but try this for size: 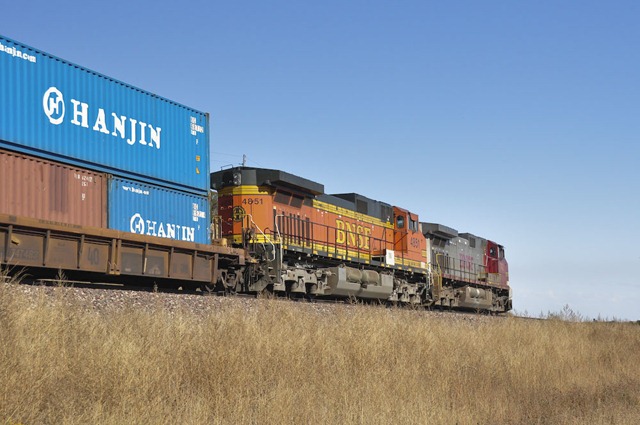 Another double-stacker, more dash-9s in a variety of BNSF heritage paint schemes… 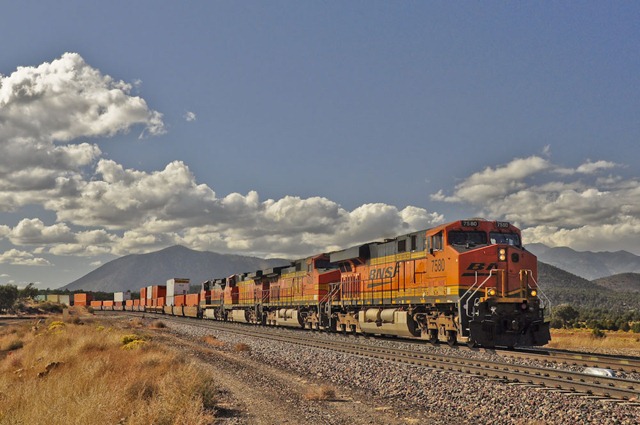 An ES44DC (almost identical to a dash-9) leads a Z train (double stacks and truck trailers on flat decks on the rear) up hill. This is what I'd come for: a long heavy freight slogging away up the grade towards Flagstaff, and this time the lighting was perfect. Can't wait to check the videos out; when 4 big GEs roar past you you definitely know. It's literally bone shaking loud; and to think I was worried that American locos would be quiet because of all the clean-air regulations! I could hear these guys a good 5 minutes before they actually appeared. 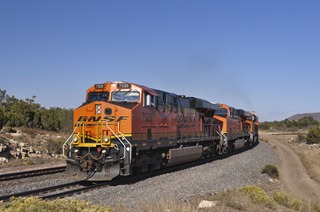 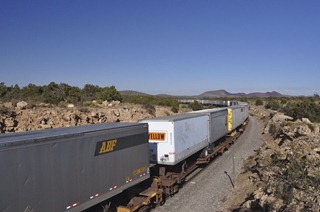 Stayed here for a while, saw some good freights. A handy dip in the road let me try out my wide angle lens on this guy: 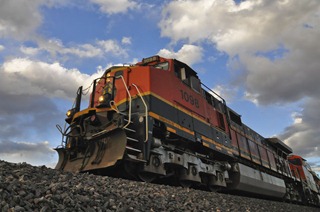 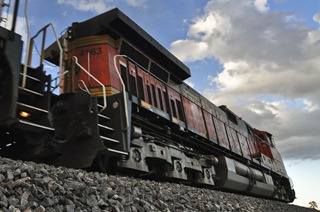 Drove 30s up the road to get this guy coming out into the sunshine, but fired it off a smidgeon early. 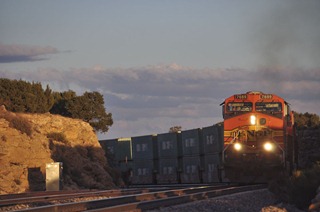 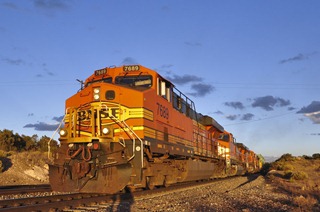 Coming out of the shadows working very hard / Just about to pass me, will need to edit my shadow out :-(

As he was heading around the corner I was in the perfect spot for a glint shot: 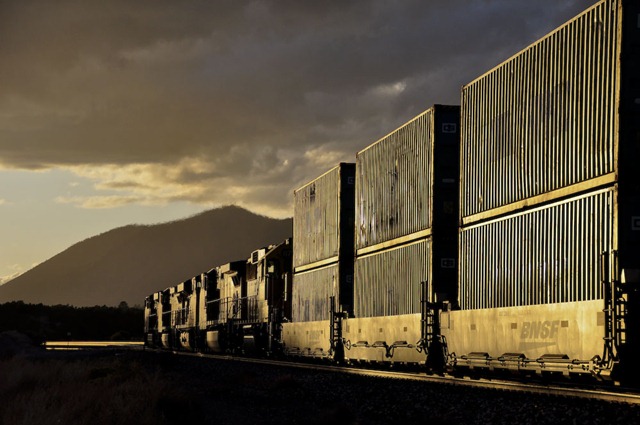 One of my favourites from today

Look very closely and you'll see a GP60 at the 5th loco in the consist, don't think it was working though. By the time he passed me he was going very slowly, only a bit above a fast run, so it wasn't hard to catch him at all. I wizzed up the road and found a side road down to the tracks immediately; I might as well have been a local. When he passed I saw the driver out on the side of the loco with the doors open and pulling various things out! So suspect that had something to do with his slow speed, for afterwards he roared through downtown Flagstaff at quite a pace.

So had a fun half-day chasing trains here, sure can't beat Flagstaff and its constant parade of BNSF. Within 30 minutes drive there are a wealth of photo options, ranging from wide open desert to mountains and forests. Definitely on my list of places to return to.

Went and had a quick dinner, then back to the hotel. Noticed that a stack train had stopped right opposite us so went and had a nosey. Only the front loco was on, but as soon as the next west-bound train had crossed it it roared into life and took off at quite a pace. A while later the same happened again, only this time it was an west-bound train being held. I went and took some photos of the DPUs… 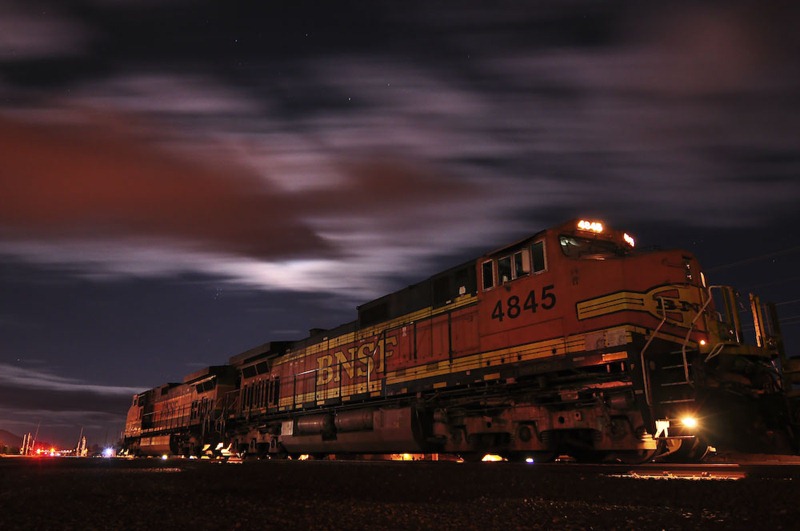 DPU means distributed power unit, and is an extremely common set up here in the States where rear pusher locos are added, but are remotely controlled from the lead locos. As I was sitting there taking photos I heard a hiss of air brakes, then suddenly the DPUs revved up and the train off on its way. Quite eerie. 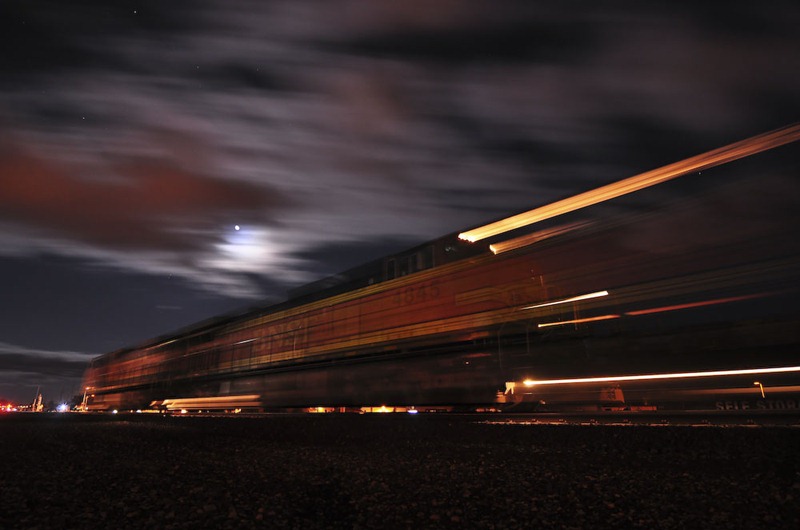 Mere seconds after this DPUs had accelerated away, an east-bound stacker came roaring through… 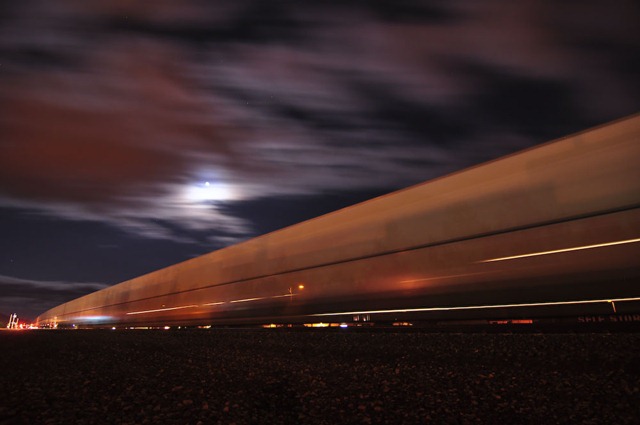 After that it was off to bed. Early this morning there must've been a train parked outside because I head it toot twice and then accelerate away. As I lay there half awake listening to the big GEs going grumble-rumble-rumble I thought "yup, I really am in railfan heaven".

One interesting things about Flagstaff is that it is a "dark sky" city, one of few in the world. This means that they've taken lengths to minimise light pollution through policies like all outdoor lighting being on timers or downward facing. I noticed that many of the motel signs were only illuminated full strength in the evening, and later at night only the vacancy sign would be lit. Also they have very few street lights, usually just a weak lamp on the corners. You'd think this would make you feel unsafe while walking around, but we never felt like that. It makes driving slightly harder, but nothing to get excited over. Makes quite a contrast to Chch where the main roads are all flood lit; could almost read a newspaper on our street. So Flagstaff is quite a cool and progressive city; shame it was out last night here.