Another day, another phone call to the rental car company. Like I said, got my account credited so the amount charged to me should now match the amount I was quoted. Amazing how complicated such a simple thing can be. Passed some interesting characters on the car; motels like these seem to attract interesting types.

Here's the motel in all its early morning glory; out of sight to the left and right are the half dozen pickup trucks and motorbikes that seem standard fare around here. 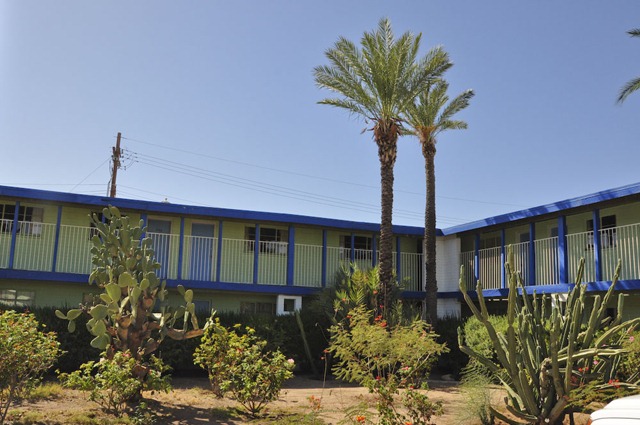 We hopped on the highway and headed… oh so slowly thanks to all the traffic lights and road works… towards Oracle, AZ, just out of Tucson. What's there you ask? Well suppose a very wealthy Texan built a very large hot house and then sealed 8 people and plants and everything they need inside for 2 years to see how they did… 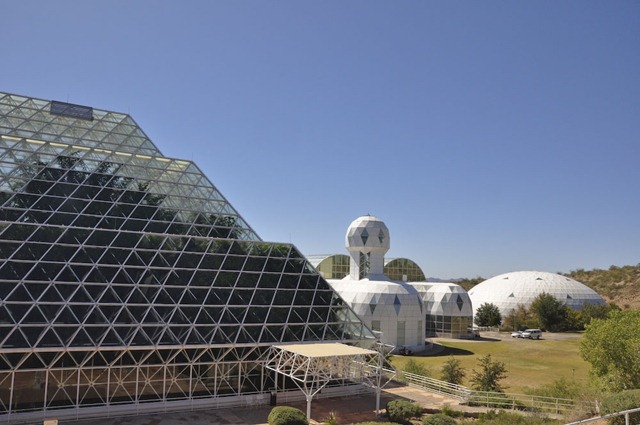 … you'd end up with this. It's called Biosphere2 (#1 being planet Earth) and when built was a completely sealed system with its own air recycling, power and sewerage systems. For 2 years it served as an giant experiment into possible colonisation on another planet and the people inside were the guinea pigs, growing everything they needed to survive. The only thing passing between the inside and outside world were messages; even the atmosphere was separate, and there is a gigantic welded stainless steel plate underneath the complex which seals it from the ground below too.

These days no one lives inside, and they have opened it to the outside atmosphere, but it still contains a rainforest, ocean, desert and temperate regions, all growing under the one massive glass structure. So we rocked up for a tour around which absolutely fascinating. 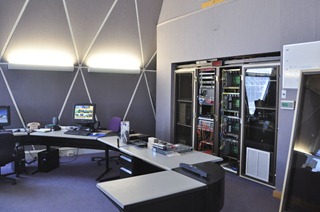 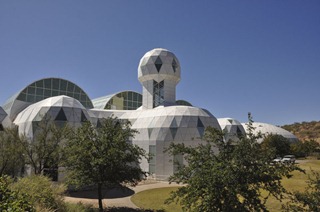 Control room / Farm wing for growing all their food 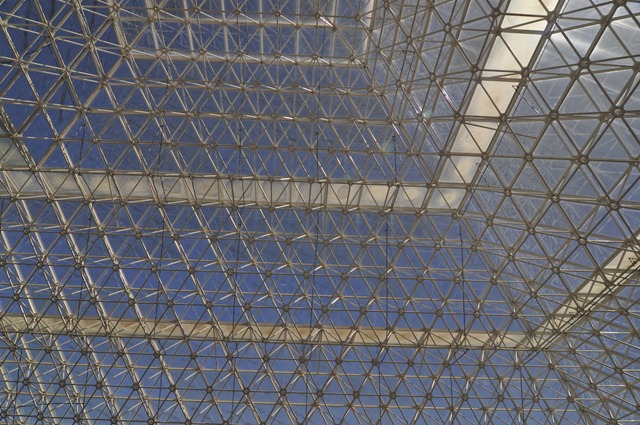 The roof is amazing, being constructed out of triangular glass sections with struts that connect up on the inside to form the pyramid shape. Note that there are no internal supports! 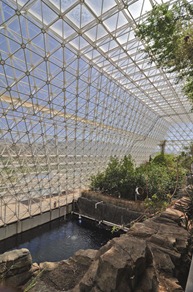 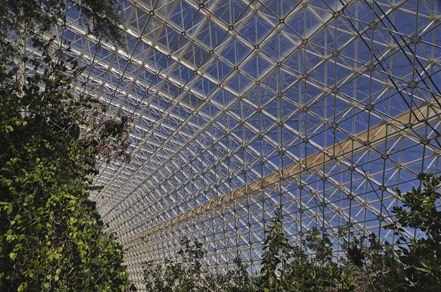 Part of the ocean, and looking down the length of the connection between the two pyramids

We toured around and saw their living quarters and the rainforest (which bought back memories of the West Coast), then into the desert regions and past the ocean. Their artificial rocks are really good, and there are a lot of them. I found the underneath of the structure pretty amazing as well though, seeing all the guts of the beast! 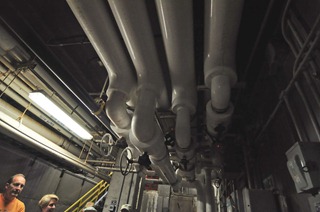 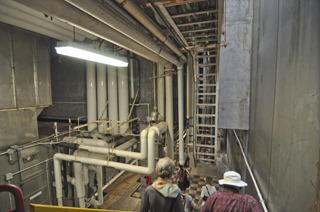 Not the crispest photos, but I'm shooting at ISO3200 here! The pipes carry hot and cold water in and out of the building which is how they regulate the temperature in the various regions. In the right hand photo above you can see a giant metal cabinet; this is one of a dozen or so massive heat exchanges (basically air conditioning systems). Coming down we had to walk past one of the vents which was currently blowing beautifully cool air, and in quantities that would (very nearly) blow you away. When you walk past a floor to ceiling fan… you know about it!

Next we went down a tunnel to one of the "lungs" of the building. The lungs stop the facility exploding/imploding under the daily heat/cool cycles, which for a fixed volume of sealed air cause the pressure to rise/fall, quite possibly quite differently to the pressure outside. So they built a pair (for redundancy) of massive lungs to help equalise the pressure. The lungs themselves are massive circular rooms with a giant rubber top that can rise/fall. 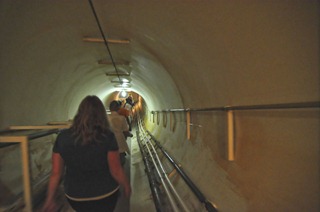 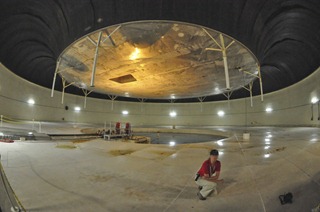 The acoustics in this room are amazing . Any sound would echo for what felt like a minute with almost no die-off. A whisper could be heard on the other side the surfaces were that reflective. Apparently they've even recorded musicians in there and it's easy to see why. The poor lady taking us on the tour was almost whispering in this room, and yet still every single t and s would set off a ringing echo. 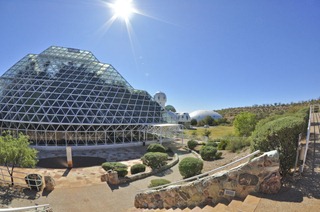 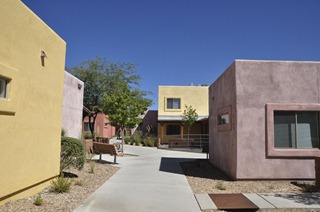 The facility is now being used by the University of Arizona for a bunch of "big" research and while there is a little surface rust on the outside, inside the place is wired head to toe with all sorts of high tech sensors. Tony, I'm sure you'd love it here!

After that it was off to the Desert Museum on the opposite side of Tucson. Another long drive, more road works, more sights of Tucson. Here in Tucson they don't have rivers; they have washes. They look just like a river, but without the water. They still build bridges over them too. I presume they only flow a few days a year during a good downpour.

Finally arrived at the Desert Museum less than an hour before closing. Had a quick look around and made a bee-line for the Cat Canyon. Here we saw a couple of Bob Cats having a stroll around, something we hadn't seen until now (usually they're asleep or hiding). They have a really weird meow, not like a meow at all, almost like a bird call actually. 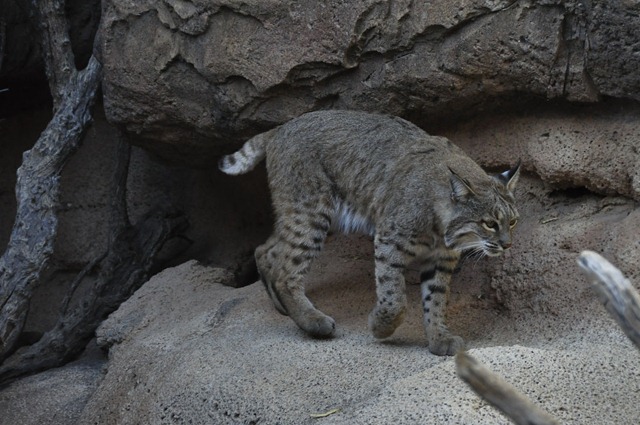 Bob Cat going for a prowl. They have tiny tails.

We also saw a bunch of other animals too… 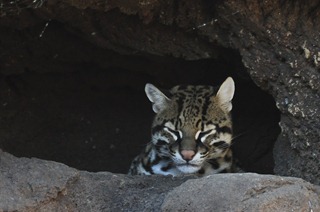 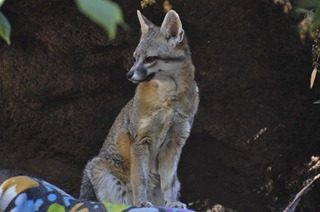 Ocelot hiding in the rocks / Fox, sitting on its very colourful blanket 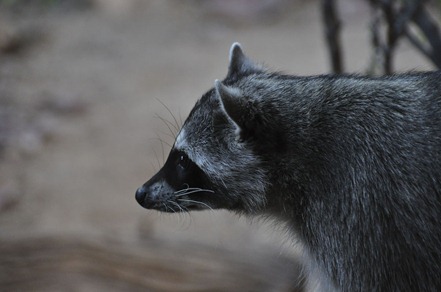 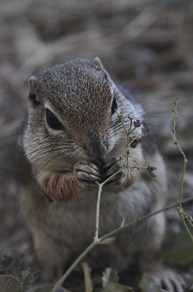 The squirrel was funny; he was in a little pen walled in by rocks with a glass frontage and unfortunately it seems he's still getting used to the glass, as while we were watching he ran straight into it, like something out of the cartoons! Poor guy went splat on the glass!

We then found an otter who was having a wonderful time splashing around in his pool. No photos, too dark and he was moving too much. But he was obviously enjoying himself cos he would swim for a bit, go for a dive, bob back up, swim on his back for a bit, dive again, and so on. He had a great enclosure too; heaps of water to splash around in. The Desert Museum has done a really good job of their enclosures; they use lots of high walls with lookouts on the top, and really really thin bars (actually just tight wires) across the lower viewing areas. Unlike other zoos where the animals felt closed in, here it felt like we were as close as we possibly could be without actually intruding on their space. Definitely a remarkable achievement.

And of course they didn't just have animals here… 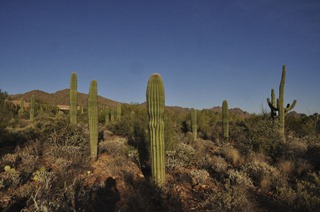 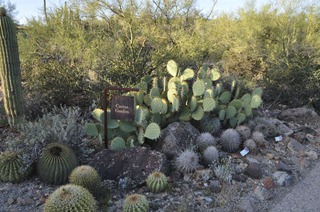 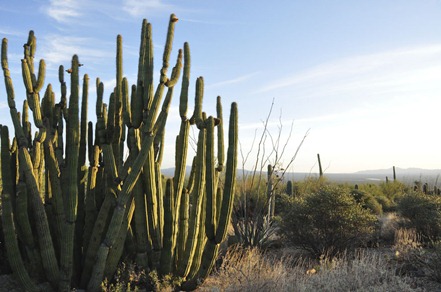 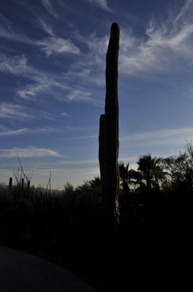 Walking along the path we startled a cotton tail rabbit… 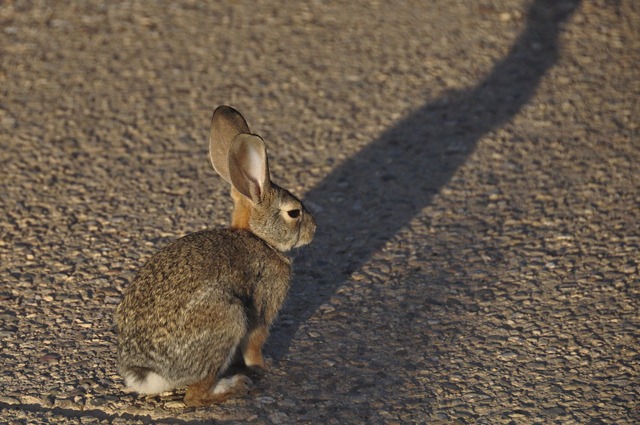 He reminds me of the cheap horror movies where the monster casts a scary shadow on the wall, and then it turns out it's just an ant going for a walk. Well Mr Rabbit here seems to be trying the same trick on us.

By now it was quite late and the sun was setting, so got some great shots. 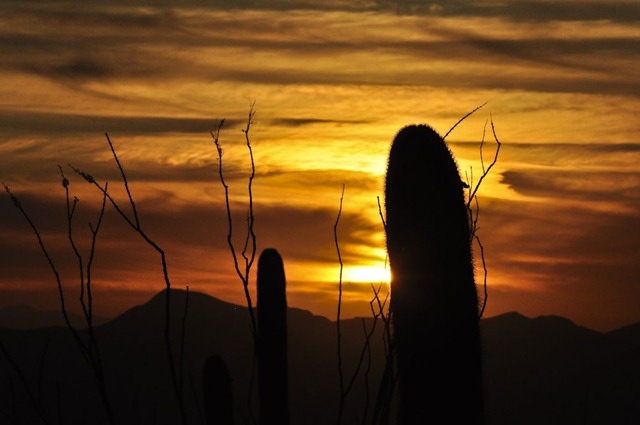 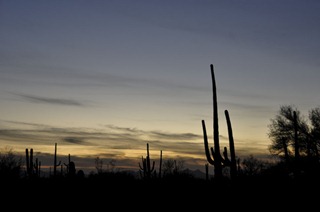 We drove out and onto the I8 towards San Diego. Utterly boring road, doubly so at night time. Hopped off Gila Bend, a tiny town with nothing much going for it other than being half way between Yuma and Tucson on the Interstate. Stayed in a perfectly nice motel for $50, only to discover that a few stops down the road there is a place for half that a night! Never mind. Had a nice pizza at the pizzeria there and the waitress was excited to hear we were from NZ, having always wanted to go there. We got chatting, got the impression she really had no idea why she wanted to go there! Back to the motel and off to sleep; had a lot of miles to cover the next day.